Just like Rath, Caldarius is another member of the Jennerit Empire’s immortal Sustained. However, the anime-inspired (Gundam) shock trooper had to walk a very different path to get there. Caldarius rose through the ranks of the Jennerit’s gladiatorial arenas to win his spot in the empire’s elite upper caste. The Sustained delivered on the tournament’s promise by granting Caldarius immortality, but also imprisoned the lowborn warrior for centuries to put him in his place. As such, Caldarius hates all other Jennerit, and Gearbox describes him as one of the game’s more serious characters. Caldarius’ biggest distinction on the battlefield is his jetpack, which gives him unmatched vertical mobility.

Caldarius primary weapons are a submachine gun and a futuristic chainsaw sword. With his quick movement speed Caldarius offer players a mix of ranged and melee combat. Add in some flashbangs to disorient the opponent and you can be in the air and out of sight in no time to land another attack when you want.

Fires a grenade that deals 142 damage and blinds enemies for 1 second.

After a brief charge, Caldarius launches into the air. Activate the skill again to land at a targeted location, dealing 359 damage.

Caldarius can activate his thrusters to jump a second time, mid-air, in any direction.

Caldarius Guides by the Community

Caldarius’ legendary gear is rewarded to the player when all lore challenges are completed. 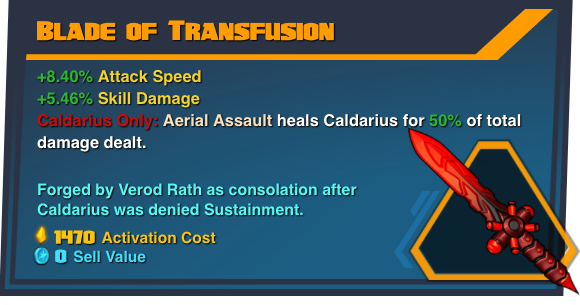 The Armor Costs More Than You

For 100 years I have served the Jennerit through blood and war. I have scattered opposition on more worlds than I can count, fighting Varelsi and outlier factions alike for the cause of a people not my own.

And when the 999th march home through the streets of Jennar in victory, it is NOT the name of the Empress or her dog Rendain that you will hear. It is MY NAME.

I have served the Empire, though it is not my home.

I have won Her wars. Destroyed Her foes. Followed Her commands.

I now demand what I rightfully earned in the Pits. I demand that right which has been denied me for a century; that which the citizens of this empire recognize as my just due, even if the Elite cannot.

The armor is highly mobile, capable of orbital drops, operable in most hostile conditions, and contains an advanced power supply that can power the frame for months without recharging.

We did find one point interesting. While the three suits of armor we have collected are nearly identical on the exterior, each suit has been heavily modified internally to accomodate the shape and biological needs of quite varied pilots. The Jennerit Empire has never been shy about expending other races in battle.

All three recovered suits showed signs of being heavily adapted for differently-sized occupants. One suit featured a very small operator’s cockpit, adjusted for a pilot probably no more than 18 inches tall. For these pilots, the experience of controlling the HTX Assault armor must have been akin to piloting a giant war-bot.

(Note: Given prior findings, we can say with relative certainty that it has become common practice for the Jennerit to impress Kemessians into their service; even more likely since the fall of the Kemessian homeworld, Askallar.)

Jennerit Shock Troops who field this armor are almost impossible to target. The alloy used in the armor, though light, is extremely resilient. The armor has a flexible array of weaponry suited for close-quarters and medium-ranged engagements. Most commonly, Jennerit Shock Troopers are dropped from orbit directly into the heat of battle. As we have observed, this is terrifyingly effective.

They are not, however, unstoppable. From our extensive studies, we have determined that the most effective way to disable a HTX Assault Frame is to…

(The report is cut off.)

A Vision of Solitude

(Excerpts from the solitary log of prisoner 81838387, “Caldarius”, over the course of his imprisonment. Audio attached, transcript below.)
Caldarius: On this, my tenth day of imprisonment, the Imperium I’ve served has provided me with this personal data recorder, to… amuse myself during my incarceration. I’m not much for journaling, or expressing feelings… but I will express them nonetheless, just in case my jailers are listening.

Rendered effectively eternal by the Sustainment process, I likely haven’t aged a day since I was awarded that curse – but then, I wouldn’t know. It seems I’ve forgotten what my own face looks like. Year seven’s not going so hot. At least you understand me, Data Recorder. Please read me another poem about righteous fury while I nod off to sleep.

It’s my birthday. I don’t have big plans, so I was thinking me and Data Recorder would go for a walk in the woods, take in some scenery. Then, after a romantic picnic, we would talk of Rendain, my plans for beating him into a pulpy stew. We did the same thing last year, but Data Recorder doesn’t seem to mind. That’s what love is, you know.

TOMORROW IS WEDNESDAY! WEDNESDAY IS ALSO THE DAY I THINK ABOUT KILLING RENDAIN!

THE DAY AFTER THAT IS—

(A voice calls out from off-mic, interrupting Caldarius.)

Deande: And you shall have your chance.

(Deande turns away, calling to someone in the distance.)

The Arena and You: Partners in Freedom

Known then as “the Kemessian”, Caldarius fought his way up the leaderboards of the Pits – from the bottom of the slave ladder to the final test of combat before the Empress herself.

He was a song. An ageless relic. Poetry in flight. Caldarius fought an Ankrosa warrior, nearly thrice his size. Grace. Finesse. Some described him as an angry hornet, though I think it a disservice to compare him thusly. No, Caldarius was a surgeon of combat. An antigen seeking a tumor. He was fury, retribution and death incarnate.

And when the fight drew to an end, Caldarius was untouched by his opponent.

Given the Empire’s nearly universal infatuation with him at that point, it is unfortunate that Caldarius chose that moment to challenge the bonds of his captivity and demand ascension into the Jennerit Elite through Sustainment. Ah, his beauty, to be wasted now in punishment, as those aged and seated among the upper castes of our society refused to share their “noble blood” with one of the lower races. Caldarius was consigned to the military, placed in the heat of the front lines of combat as a member of the 999th Shock Division.

Between Kemessian the slave and Caldarius the Shock Trooper, I believe the slave had better odds of survival.

Perhaps his assignment to the 999th will sate his hunger for blood, and stay his desire for Sustainment, an act never performed on a non-Jennerit.

I have to admit, you may be right. I believed Caldarius to be no more than a hate-wrapped ball of angst. But if the reports I’m reading about the part he played during the Battle of Penarch are true… damn. I have led whole DIVISIONS of UPR soldiers who could not have performed as Caldarius did on Penarch.

Verod – it is also nice to speak to you, even if indirectly. I know we’ve not always gotten along, but I think it’s going to be critical to put those past battles behind us if we even have a harresburra’s chance in Helicia. I know you have some recent history with Caldarius, and any help you can give us in finding him would be, well, helpful.

The question remains, though – where is he?

Accounts near the end of Penarch say his armor was powered down and he was all but immobile. If my hunch is right, though, he’s gonna be looking for a source of energy.

I’ll need your best leads if we’re to find him and recruit him to our cause.

Caldarius is about eighteen inches tall, yes.  Not all shock troopers are the small Kemessians. Many of them are normal-sized Jennerit.

Askallar was overrun by the Jennerit Empire in 19,739 c.r. in an event known as the “Reaping of Askallar”. The Jennerit, aware of an impending Varelsi darkening there, offered the Kemessians the options to become slaves and live or remain behind and die to the inevitable tide of Varelsi about to claim the planet. Only a fraction of the populace accepted the “Reaping”. A few others were forcibly taken (re. Caldarius).