Once she served Lord Commander Lothar Rendain, but since his was crimes Deande has joined the Battleborn in order to undermine his plans. Deande has served as a spymaster for over 1000 years and is an immortal assassin. She uses deception and stealth as she can create a decoy of herself.

Deande is lethal at both close and long range, using her swift melee combo or deceptive thrown War Fans to steal 15% of health damage dealt to her foes.

Cloaks Deande and deploys a decoy (20% health, 25% damage) to fight in her stead for 8 seconds. Upon death or expiry the decoy explodes for 208 damage.

Upon activation, Deande unleashes a flurry of 9 strikes directly ahead of her, stunning enemies and dealing 71 damage per hit.

[PASSIVE] THE ELEMENT OF SUPRISE:

For 5 seconds after uncloaking, all of Deande’s skills and attacks deal 25% additional damage.

Deande Guides by the Community

Deande’s legendary gear is rewarded to the player when all lore challenges are completed. 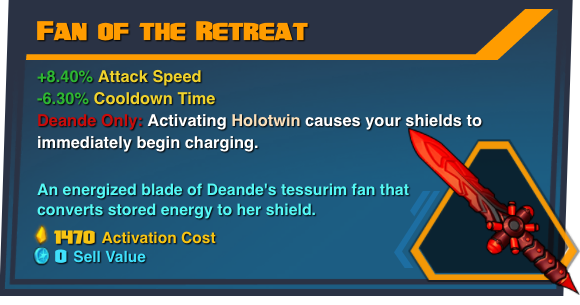 Fan of the Empire

Coincidences such as, “where was the Spymaster during the yearly Assets meeting, over which she presides”, or, “why is the Spymaster unavailable for our regularly scheduled game of handball before every rebel-led attack on Imperium stockpiles”?

Do NOT forget the Asset Meeting next year; request Ocobanian caviar sent to any frustrated attendees from this year’s meeting. Also, rework handball schedule with the Tyrant.

History records the first utterance of the Precept shortly after the rise of the Jennerit Imperium’s current incarnation – one that valued the continued survival of the species above all else. Some scholars argue that, after the adoption of the Precept as something of an official credo of the state, the Imperium began to lose its way, culminating with Lothar Rendain’s rise to power.

I’m pleased to report that with today’s victory, we’ve corrected this error in judgment on the part of our ancestors. And as the smoke clears and we Jennerit closely examine our destiny, I believe it’s time we shed the Precept once and for all.

We are taught these words from birth: by any deed, at any price. But those of us who have survived the Solus War know that there are some costs that cannot be paid; some debts that will follow us for the rest of our freakishly long lives. Now, our task is to find new words to guide that destiny, alongside our new allies.

I’d like to suggest “live together, die alone”, but I’m open to alternatives.

Rendain is gone – but so is our beloved Empress Lenore. And though we find ourselves rudderless in this new age, one thing remains clear: the path ahead is one we must walk together, as stewards of the Last Star. Sentinels of the dark.

Children of the Precept – our battle is not yet over. And if we’re really fortunate, it will never truly end.

The dissolution of the Pact of the Dying.

The fall of Codex.

All steps leading us onward into the growing dark.

With this course of events now seemingly inevitable, I now move to further gain the Tyrant’s trust as I simultaneously labor to undo his web of power. In a few days, if my work is successful, the Thralls will enter into open rebellion a second time, this time motivated by the escape of the soldier Caldarius from his hundred-year imprisonment.

For posterity, I record that the trust Rendain has bestowed upon me recently is directly related to his need for counsel during the “Caldarius Affair”, in which the champion-soldier publicly demanded (and was eventually granted) Sustainment. Rendain underestimates the emotions of the Jennerit populace, and the amount of pride the Empire derives from its warriors. Long have the Jennerit recognized that true legends are born in battle.

Throughout this controversy, my counsel to him has allowed me to step further into his confidence – though I would be foolish to underestimate Rendain by believing him unaware of my involvement in these matters. Still, he has no direct proof and would find it politically unadvantageous to accuse me openly.

Such a narrow wire I walk.

The Seeds of Secret Orders

She is both born of our throneworld, and is of the highest bloodline, her parentage being the #RECORDS_REDACTED#.

Beyond the qualifications of her blood and breeding, #NAME_REDACTED# has put herself forward for service in the Silent Sisters at an unusually young age. We will see her into the order, under the care of Matron Divia, and will see Matron Divia informed of Our personal intentions.