Francesco Drake ruled the LLC’s professional wrestling circuit as El Dragón until his last match, when the renegade magnus ISIC claimed his title… and his arms. Fit with cybernetic replacements, El Dragón now fights for the Battleborn, patiently awaiting a rematch against his greatest foe.

El Dragón’s primary melee combo is a furry of blows, while his secondary is a powerful clap. Activating his off-hand melee while sprinting executes a Dropkick.

The symbol of El Dragón’s faded glory in the ring provides a synergistic effect with the champ’s abilities, Increasing his effectiveness in battle.

El Dragón leaps into the air and falls back down, dealing 208 damage to nearby enemies. En Fuego: Stuns all enemies damaged.

Each enemy killed grants a stack that boosts El Dragón’s melee damage and damage reduction by 2%, to a maximum of 10 stacks. Half of the stacks are lost on death.

El Dragón’s legendary gear is rewarded to the player when all lore challenges are completed. 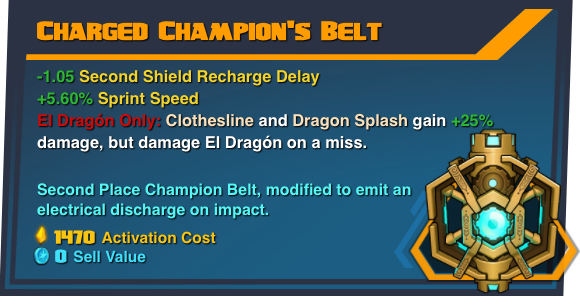 The Price of Disarmament

Greetings from the LLC Emergency Medical Services billing and accounts department. Please see the attached statement outlining your treatment and our services rendered:

These charges have been automatically withdrawn from your account.

You should probably get a job or something!

Captain Ghalt has asked me to run background checks on several prospective combatants for our little fighting circus. I believe I have a prime candidate!

Françesco Drake was born in the LLC Arcfleet to a well-muscled family of Aplian immigrants. His father was a menial labor AI programmer within the Minion Robotics Manufactory. Don’t remember his name. Not worth the bother.

Drake grew up with, well, let’s call it a “bashy-bashy temper thing” towards the minions, and learned a myriad of wrestling and combat moves by fighting de-bladed M1 units as a child.

He took a job with the Manufactory in his early twenties, but was fired for practicing wrestling moves on the very robots he was paid to assemble. Such a waste. Of good robots, I mean.

Unemployment wasn’t even a brief setback for Drake, though – he began moonlighting as a luchador, of all things. In a sense, being fired put Drake directly on the career path of his dreams.

He rose quickly as an aspiring star of the LLC Holomatches under the assumed name “El Dragón”. Drake’s particular brand of destructive insanity mixed with eccentric style was exactly the thing the Last Light elite loved to see before a warm drink and a cold bed. Or something of the sort. Anyway.

The bemasked El Dragón won nearly every championship the Arcfleet could provide for him. That is, until one robotic contender contested his title as Grand Champion and pulled off his arms. Right off. Literally, right there on holomatch broadcast.

Drake’s story is all rather plain after that, I’m afraid. He was rushed to cybernetics where the quick and skilled aid of a handsome and devilishly clever engineer saved Drake’s life and attached two beautiful robotic arms.

I guess you could say he found the experience quite disarming.

You really have to give him a hand.

I suppose he really “shouldered” his injury well?

El Dragón was never one to stay down long. Or at all. Taking a job as security for the Hemsworth family, he squeezed his way back to the top, not nearly as bitter I would have expected. Nowadays, he spends most of his free time hunting down any info he can, searching for that elusive robotic bastard who plucked off his arms.

(As far as I’m concerned, ISIC can STAY missing. I don’t plan on running into him any time soon.)

The Fall of the Luchador

(Broadcast excerpt from the historic CWF Heavyweight Holo-Championship, live from the Arcship Holotronica on y.19954, d.150, where Cosmic Grand Champion El Dragón faces off against a mysterious new challenger, later discovered to be the Magnus ISIC.)
Hardcastle: This is Dave Hardcastle, and you’re listening to LLC News. Tonight’s highly anticipated brawl between CWF heavyweight champion El Dragón and newcomer ISIC wasn’t the epic showdown that fans had anticipated. The fight came to a sudden and decidedly violent conclusion when ISIC seized the champion by the wrists and tore his arms from his body. Lasting just 45 seconds, ticket-holders immediately demanded refunds, calling the bout “the greatest rip-off in CWF history”.

Heh. I just got the joke. That’s kinda funny, I guess.

Anyway, we now go live to our own Manny Fetzer, backstage at the Arcfleet Arena, for a word with the fallen champion.

Fetzer: Thanks, Dave. El Dragón, you were the longest-reigning champion in CWF history before tonight’s crushing defeat. What happened? How did ISIC succeed where so many others have failed?

El Dragón: HE RIPPED MY ARMS OFF, YOU IDIOT! GET OUT OF MY LOCKER ROOM! WHERE IS THE DOCTOR?! WHERE ARE MY ARMS?! WHAT IS HAPPENING?!

Fetzer: Some are speculating that due to the CWF’s prohibition on cybernetically-augmented organics in competition, this may very well be a career-ending injury. What’re your plans for retirement?

El Dragón: Retirement?! What?! El Dragón… El Dragón will never retire! No matter how m-much… how much blood he loses.

Fetzer: Word is that the CWF has already ruled against you, so… you kinda already retired.

(El Dragón’s knees buckle and he falls out of frame with a thud.)

Fetzer: The ex-champ appears to have passed out, so it’s back to you at the studio, Dave!

The Rise of the Dragon

(Advertisement, circulated late y.19957 and paid for by Holomatchtastic, a newly-formed subsidiary of the Hemsworth Barony.)

From the ASHES! From the PIT! Rising up from the FIRE!

No, not The Phoenix!
He was defeated a decade ago!

Not Lavamangler!
She was lost in the tragic Darkening of Vulcanus 17.

REINTRODUCING…
EL DRAGÓN!
(Along with his new friends.)

Rebuilt! Re-armed! And ready for the rematch of a lifetime!

To the disguised robotic coward who wounded the PRIDE of El Dragón during the Arcfleet Holomatch Grand Championship of 19954…
FIGHT ME!
I will RAM your FACE and CRASH your DRIVES! I will reclaim my title, and be victorious FOREVER!

Contemptfully,
the one, the only,

(Letter addressed to the Hemsworth Barony.)

Dear Most Distinguished, Brave, Capable, Wealthy, and Employers-To-Be Sirs or Madams of the Hemsworth Barony Guildship,

I am… FRANÇESCO DRAKE! Yes, that lacks the panache of “EL DRAGÓÓÓÓÓN!”, a name you might better know me by, along with my incredible Holomatch career, but it is the name I was born with.

If you’ve heard of me (and I’m sure you have), you will also have heard of the recent loss of my spectacular bulging-with-biceps arms. You might say that my opponent… DISARMED ME.

My cybernetic doctor, one Gunnar Kleese, has recommended me to you, starring in the role as YOUR PERSONAL HANDSOMEST SECURITY GRAND CHAMPION! Yes, it is true! I can provide you not only with my glorious trademark moves of combat (for example, my brutal CLOTHESLINE! and awe-inspiring EN FUEGO!), but I can also protect your family at an affordable cost with a capable and attentive skill for protection and intimidation.

I am also proficient at bedazzling.