There are many strange beings in Solus, but the ice golem Kelvin is definitely one of the strangest — a single consciousness emerging from a colony of extremophilic microorganisms. Rescued by Miko, Kelvin now fights for the Eldrid to preserve what’s left of the cosmos.

Kelvin is an ice golem

Kelvin’s primary attack deals 60 damage with a series of melee strikes, while his secondary attack pounds the ground, dealing 79 area of effect damage.

Kelvin’s dense crystalline ice shape is exceptionally durable, allowing him to soak up damage for his team.

Bite an enemy, dealing 75 damage plus 15.0% of their max health up to 500. If the target is killed, Kelvin gains permanent health. Instantly kills minor enemies.

After a 1 second delay, Kelvin creates an impassable Ice Wall for 7 seconds that will stun nearby enemies on spawn and block movement.

Kelvin Video Guides by the Community

Kid Ultra’s legendary gear is rewarded to the player when all lore challenges are completed. 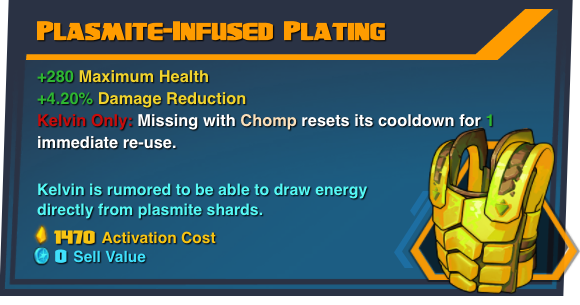 SPECIES CONTACT REPORT
BY: researcher miko
DATE: 19921.37
TOPIC: we have found them

we have sought. we have found a remnant.

they are many. they are one. a great city but constituted as one voice.

in the remains of the Ooran darkening, they are parts. parts of a whole. many and small. microscopic, yet congregating in clouds and mist.

we must with them speak.

they exist as the many in the frozen dark and yet thrive. cold yet not frozen. we will call them ‘kelvites’.

they are many, yet they speak as one. this is incorrect. yet they persist. we will call this one ‘kelvin’.

they are not yet as ‘kelvin’ a whole. we will help make them one-and-many, restored again.

we are mikollopria. we remember.

The Best Defense Is De Fence

Captain Trevor Ghalt, recording this log entry in hopes that whoever finds it might find something amusing about our frozen butts out here.

I’ve been hunting rogue Varelsi parties on Bliss with one of our newer Battleborn recruits, a being named Kelvin. Thus far, I’ve been quite impressed by Kelvin’s quick decision-making, lethal cold, and his heartwarming protective attitude. This time, though… maybe a tad much.

We’ve been tracking down Varelsi hunter patrols here, and have had a few close calls in heavy fights. Guess all that made Kelvin a bit jittery. Some indigeneous fur-covered rat-thing jumped out from behind a rock, and Kelvin… well, he got a bit over-protective.

Best I can tell, the ice walls around us are thirty feet thick, and not melting any time soon. Also, signal to the outside is poor.

Here’s to hoping Kleese gets out of his pilates appointment early, or that my new buddy Kelvin here stops being afraid of snow burras before I run out of rations or heating cells.

(No, bother. Scratch that. Too emotive.)

Dear future self who may remember how terrible (and terribly boring) the times were in the days following the fall of Penarch.

I have acquired a new friend – friends, I should say. Two individuals in need of my aid and renowned talent for uncovering the secrets of the wily Aztanti!

My first new friend is the noted Eldrid “combat botanist” (so they say) named Miko, and I must say meeting Miko has been far more enthralling than watching the few reports available from the Arcfleet holonet.

My second new friend is a rather cold and shapeless entity, upon whom Miko has affixed the name “Kelvin” (though I still insist “Icy Cloudburst” is more appropriate!). Kelvin is the fellow in need of my help.

As Miko has described to me, Kelvin isn’t a cloud at all… well, he is, but not in the sense of “cloud” clouds. Kelvin is a swarm of microscopic sentients who (when swarmed together) can produce some semblance of single-mindedness in thought and speech. They (He? It?) are capable of transferring energy on the cellular level, rendering the areas around them immensely cold, and even icy at times.

Kelvin’s dilemma is this: he has no stable relatable shape, which makes it difficult for him to communicate well with beings around him.

Miko has asked me to help find a suitable endoskeleton to which the colony can bond, making it possible for Kelvin to manifest in a consistent physical form. I have suggested a number of known alloys to Miko, but she (it?) says Kelvin does not like the “taste” of metal. Likewise, plastic and plastic hybrids seem to be as enjoyable to Kelvin as sleeping on befouled styrene would be to me.

I have one more thought.

The ancients of that planet have left dozens of temples and relic caches on the planet, and those artifacts have survived for tens of thousands of years without decaying under the planet’s brutally frigid climate.

Also, Aztanti relics are known to light up beautifully in response to nearby energy sources!

Furthermore, many of the relics that have survived are the remains of skeletal Aztanti “guardians” – golem-like beings which the civilization seems to have had a penchant for constructing.

I’ve decided to send an expedition to recover one of these Aztanti relic skeletons for my icy friend, and we’ll see how well he takes to it!

After several days of searching, our expedition has recovered a suitable Aztanti relic skeleton for my new friend Kelvin. The kelvite colony seems to be bonding incredibly well to the strangely-imbued stonework, and we could not be more pleased with the results!

Kelvin now inquires as to the overall shape he should present. I preferred something more pleasant and rounded, like those new “MX.Elite_Bot” (or as I like to call them, “fat toddler”) minions by Minion Robotics, but Miko disagreed. A few hours and several unfortunate hands later (turns out, Miko is an absolute beast at poker), we both agreed that Miko’s suggestion was more appropriate for the current needs of the universe.

And now, Kelvin has taken a shape suitable for a galaxy at war, something intimidating and more imposing.

Miko believes the bestial form hearkens to the look of the “dragons of Bliss”. (Frankly, I think he looks like a great Lorrian toad-goat.) Still, Kelvin seems pleased, so that’s that, I suppose.

Miko Are All My Friends

(Progress report on Kelvin’s universal translator plug-in, recorded by Gunnar Kleese. Audio attached, transcription below.)
Kleese: Chief Science Officer’s log. After a not-insignificant amount of tinkering and mad scientisting, I believe I’ve stumbled upon a solution for Kelvin’s… communication problem. The being is so telepathically powerful that tuning into his particular frequency should be no problem at all. And if I’m right – oh, listen to me, of course I’m right – we’ll be having polite conversation with our new, terrifying associate by suppertime tomorrow. Thanks, science! “You’re welcome, Mr. Kleese!”

Now then, let’s give it a go. Kelvin, please come here for a moment…

(There is a loud roaring sound from off-mic.)

Kleese: Yes, I’m sure whatever you said is VERY interesting and compelling, but just – just come over here for a second.

Kleese: Very good. Now then… turn this dial here, adjust this doohickey… give me a level, won’t you?

(A clear and steady voice comes from off-mic, speaking in an incomprehensible alien language.)

Kleese: Not… quite. Maybe here?

(The voice is replaced with intense retching noises.)

(Retching noises fade into a clear and strong voice, mid-verse.)

Kelvin: “I am the winter of your discontent!”

Kelvin: I am indebted to you, fellow.