Mellka has some anger issues to work out. Fortunately, between her TX-12 Venom Launcher (which can rapid-fire loads of specialized nano-chemical mixes at foes) and an exotic Eldrid Bio-Glaive (a specialized near-living glove which can reshape itself based on subtle neural prompting) she’s always prepared to kick serious ass on the next away mission.

The Eldrid tend to be scientific-minded and peaceful folks, in tune with the natural order of things. Mellka apparently missed the memo at the last Eldrid meeting. Born in space, Mellka developed an early hunger for solid ground, and found a clear calling in special operations, even joining with the Eldrid group called The Vigilant. While serving with The Vigilant, she developed close ties with an elite Peacekeeper operative named Trevor Ghalt. While proficient at several combat styles, Mellka prefers some of the more exotic Eldrid weaponry including an Eldrid Bio-Glaive which reshapes itself based on her neural prompting.

“I like playing Mellka with serious stealth. She can really get a jump on an enemy if you spec her helix for it: Sneak up on an opponent, drop a spike for some initial damage that also pops her into the air and triggers invisibility — then light them up with Venom.” – Steve Gibson, VP of marketing for Gearbox

It’s slow-loading and doesn’t pack a punch up-front, but it lets you tag your enemies and do damage over time.

Pull off sick combo attacks with Mellka’s monstrous melee weapon. As a bonus, make sure to pop off a couple Venom canisters at the enemy and the Bio-Glaive inflicts additional damage.

Charges a burst of energy that deals up to 208 damage to nearby enemies and launches Mellka into the air.

Unleashes a barrage of laced blades covering targets in venom and dealing 175 damage with each hit.

Mellka  Video Guides by the Community

Mellka’s legendary gear is rewarded to the player when all lore challenges are completed. 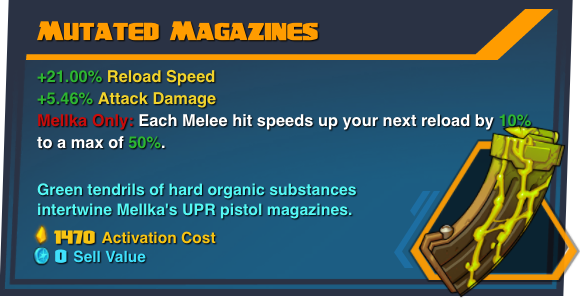 || UPR NON-STANDARD WEAPON INDEX
|| ARMAMENT: Custom TX-12 Machine Pistol, S.N. 5028474583
|| ASSIGNED TO: MELLKA HYENYOTA (pr. hīyĕn’yōtäw)
(Do NOT mispronounce Mellka’s ancestral name in front of her. If you absolutely have to say it, look up the phonetic key and practice a few times first. Otherwise, just stick with “Mellka”. Trust me on this one. –Ghalt)

Modified from a TX-series machine pistol, Mellka’s TX-12 has been altered to disperse volatile toxins at a high rate of fire. These toxins rapidly destabilize atomic sub-structures in a localized area, and can reach lethal concentrations in seconds under the right circumstances.

ADDENDUM (y.19948, d.221):
Mellka draws likenesses of Varelsi on each toxin pellet fired. We’re unsure when she finds the time for this. It is rumored that she’s repurposed an M1.Minion unit to serve as a local fabricator for her toxic projectiles, but there’s no physical evidence to support this theory.

Farhallim, however, is worth recounting. Not as an assessment of pre-Darkening Varelsi attack formations. Not for yet another investigation of the otherworldly wormhole crafting of our enemies. Not even because Farhallim was darkened alongside its star (an uncommon event – typically the planets are left to spin lifelessly into space).

We should remember the Darkening of Farhallim because of a child – Mellka Hyenyota, an Aelfrin born in space on board the Eldrid research vessel Athyrium.

Mellka’s parents – her father a Penarch-born human researcher, her mother an Aelfrin refugee from Eshteni – raised Mellka amongst the scientists and relief engineers of the Athyrium. They lived on the vessel together for five years, and the young Mellka, with her curiosity for nearly every part of the crew and its mission, became a favorite adopted daughter amongst many of the researchers.

However, the darkening of Farhallim brought a great tragedy into the life of the half-Aelfrin. Mellka’s parents were part of the extraction effort on the Fahallim. The unforeseen Darkening of the planet itself cut their expedition time much shorter than planned, and Mellka’s parents did not escape the planet before it was lost.

Understandably, the child Mellka is confused, angry, and seeks vengeance for the loss of her dear parents.

Despite her strong emotional response, Mellka continues to exhibit extraordinary reflexes and a sharp mind, even under immense pressure. Given her new and tragic motivations, I believe it is worth investing special attention into her development. She could be a candidate for rapid advancement to higher offices within the Eldrid Vigilant once she is of age.

To defeat a Conservator, a combatant must fight through dozens (if not hundreds) of foes in order to attack the Conservator directly.

During the final days of the Battle of Penarch, Vigilant Operative Mellka Hyenyota fought and defeated a “swarm” of seven Conservators. Four of the Conservators were so physically broken that their death-deconstitution (surmised to be a sort of automatic battle injury recovery mechanism for the Varelsi) did not activate, leaving behind the first Conservator corpses ever recovered for close observation.

Witnesses attribute more than two-hundred Varelsi “Skulk” and “Scaven” kills to Mellka. Those same reports also describe Mellka in “a berserker-like battle-rage” that only escalated as the fight progressed. Two credible witnesses also describe the battle glove worn by Mellka (called “The Fist” c.f. ARMAMENT REPORT of the RED OBSERVER from the 193rd day of 19948) elongating and changing shapes during the course of the battle.

While other aeons may have seen a recommendation that Mellka be contained and removed from battle, it is the recommendation of the Black Observer that Mellka’s rage be encouraged. She has proven herself a most capable destroyer of our foes.

ARMAMENT EVALUATION REPORT
Concerning The Eldrid Mass-Morph Bio-Gauntlet known as “The Fist”
from The Red Observer on 19948 C.R. the 193rd day

CONFIRMED – Vigilant Operative Mellka was able to recover the bio-gauntlet known as “The Fist” from Codex before its Darkening.

CONFIRMED – Operative Mellka has begun to employ “The Fist” on the field, and has tapped into the linked neural control of the gauntlet’s shape and function.

CONFIRMED – Mellka never removes “The Fist”, not even to sleep or (presumably) bathe.

SUSPECTED, PARTIALLY CONFIRMED – The Fist has bonded permanently with Mellka, due to her mixed lineage. It has changed from its dormant shape and seems to be grafting itself to Mellka’s arm.

NOT CONFIRMED – As an artifact of the Observers, “The Fist” is capable of granting access of the bearer into the Observer neural information net. It is unclear if Mellka has discovered this function yet. More monitoring is recommended to verify the establishment of this neural link.

ADDENDUM:
I now write my final entry as the Red Observer, as the time long foretold by our calculations has come. We should seek a suitable replacement for the office. I will attempt to forward my recommendation and reasoning prior to my end. I have but one individual in mind.

(Excerpt from conversation between UPR Captain Trevor Ghalt and Eldrid Vigilant Operative Mellka Hyenyota aboard the Nova the day after the dissolution of “The Pact of the Dying” on y.19954, d.177 C.R. Audio attached, transcript below.)
Ghalt: Well, it’s done. The Pact is disbanded.

Mellka: Never thought I’d see it – one of the factions turning against us. Guess it had to be Rendain… dude even looks like evil incarnate.

Ghalt: We should be winning this war. Instead, we’re being driven from star after star with our tail between our legs.

Ghalt: You’re not making me feel much better right now.

Mellka: We only lost at Jennar because of Rendain’s “surprising yet inevitable” betrayal. The Eldrid can mass an army! Or… something close to an army. And we’ve got minions! And your plans.

Ghalt: Eh, it’ll take more than the Eldrid. I can bring in the UPR, I think. And… well. MAYBE Reyna and her Rogues. Then there’s Deande…

Mellka: No, sorry. I don’t… trust the separatists. And I definitely don’t trust Deande.

Ghalt: You CAN trust her. We’ve got history. And we’ve already worked out a pretty sweet bargain: we get her off Tempest alive, and she helps us buy some time before Rendain makes his last play at Solus.

Mellka: She friggin’ tortured you!

Ghalt: C’mon, who else CAN we count on? The factions? They’re back to squabbling over resources. They’re planning on defeat.

Mellka: Then screw ’em. We don’t need ’em – we’ve got Captain Ghalt and his mighty rolodex. You know plenty of badasses, right? And if they’re anything like me, they probably owe you a favor or two. We don’t need an army. We need a team. Precision strikes. No bureaucracy, no squabbling, no bullcrap.

Ghalt: Hm… that’s not a bad idea. I’ll make some calls. You on your way back to Solus?

Ghalt: Good, ’cause I got the perfect job in mind for you.

Mellka: You’re going to make me rescue Deande, aren’t you?