When he’s not clotheslining bears for fun, Montana can be found on the battlefield, soaking up industrial-sized buckets of hurt and suppressing enemies with his fearsome minigun. A friend to everyone, Montana controls the Battlefield with sprays of ice or fire, and sometimes just a good old fashioned shoulder dash.

The Battleborn Montana is a Peacekeeper, don’t let his imposing frame fool you. The gigantic trooper is one of the most cheerful characters in Battleborn,  because he gets to do what he loves and that’s shooting people with his Badass Gatling gun. As Montana might be a an easy target due to his size, he has a rather small head of which he’s real sensitive about. But this makes landing headshots a lot more difficult. Montana isn’t the fastest character but he can pack a punch and once he reaches his ultimate ability he jumps over large distances with his twinkle feet.

Montana’s primary weapon is an Gatling Gun, because big guys need big guns. The once that are powerful and  live up to expectations.  By holding down the left trigger you can spin up the barrel in advance. While shooting with the right trigger Montana’s gun will overheat if you shoot continuously for too long. Looking into his skill tree Montana has some augmentations that are built around this fluctuating temperature level.

A truly fearsome weapon, the Minigun accumulates heat as it fires, increasing bonus damage dealt. Augments can increase or modify this effect.

Montana’s remarkable size allows him to soak up a substantial amount of damage.

Montana dashes and collides with an enemy, dealing 208  damage and knocking them back. If the hit enemy hits an object, that enemy is stunned for 1.0 seconds.

Unleashes a mighty stomp dealing 359 damage and knocking nearby enemies into the air. Montana takes reduced damage for 10 seconds after.

The hotter Montana’s minigun is, the more bonus damage it deals.

Montana Video Guides by the Community

Montana’s legendary gear is rewarded to the player when all lore challenges are completed. 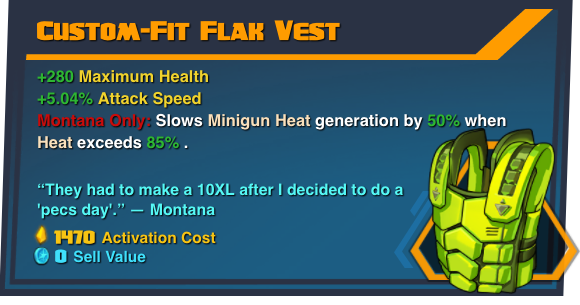 Recording some notes here about recent joint-operations on Bliss with my former UPR colleagues, now that they’re no longer devoting energy to trying to capture and jail me for going AWOL after Penarch.

One particular soldier – Montana – has caught my eye. (Not that he could AVOID catching my eye. He is just enormous.) Montana was raised like me, with classic Aplian values of hard work, strong loyalties, and determination to finish what you start. While big for even one of our native boys, I have never known Montana to lose his cheerful demeanor. It must be unsettling to be on the other end of his guns.

NAME: Montana (no listed surname)
ORIGIN: Aplia III – Moon N3, Ocoban System
PROFESSIONAL BACKGROUND: Lumber Extraction Specialist
UPR RECRUITMENT DATE: y.19933, d.130 (25 years service)
AFFILIATES: Oscar Mike, A. Benedict
NOTABLE SERVICES RENDERED: Highest Rank attained during the Ekkuni Repulsion Raids (y.19936), refused further subsequent promotions, citing the fact that he was “having too much fun here”; The Garden Campaign (y.19940) alongside the “Mikes” (where he first became acquainted with Oscar); Battle (and Darkening) of Codex (y.19956) in which he was recognized for “Outstanding Service to the Cause of Cheerfulness in Dark Times” (or whatever that Eldrid word is); the War of Penarch (y.19957) where he personally saved the bacon of yours truly.
PRESENT STATION: Bliss UPR Defense Corps, recently left station at Ocoban Base (named after his home star system) due to “robots getting too weird”.

Between you and me, Logbook, he’ll be one of the first I call when this business goes down.

The Hearty Son of Aplia

(Classified UPR report discussing tough decisions to be made in the near future regarding evacuation from a soon-to-be-phased star.)
|| TO: Fleet Admiral Bannon
|| SUBJECT: RE: Aplia N3

Per your orders, UPR intelligence has prepared a cost-benefit report on the four inhabited UPR colony worlds orbiting Ocoban. Given that the rapidly degenerating state of the star necessitates a tight window of operations, our advisors unanimously suggest focusing our evacuation efforts exclusively toward Aplia N3 and its five equatorial settlements. Please see the attached report for additional details.

Though the total number of inhabitants may pale in comparison to the other colonized worlds, the people of Aplia N3 are of considerable value to our campaign against the Jennerit. The rugged, mountainous planet has shaped these civilians into a hardy, physically capable, and uncommonly resilient people. This is a resource we’ll need in the conflict to come, particularly if the Unified Parliament continues to stonewall the reactivation of #REDACTED#, despite our mounting casualties.

In summary, this panel advises the following:

FIRST: Operations in the Ocoban system be restricted to Aplia N3 alone, to minimize loss of fleet resources and personnel.

SECOND: Accordingly, #REDACTED# to minimize the likelihood of Parliamentary intervention and any subsequent political fallout. #REDACTED#, but better to ask forgiveness than permission.

THIRD: Invoke the appropriate discretionary powers to hasten the repatriation process and move combat-ready refugees into conscription and basic training as soon as possible.

These men and women are born soldiers. This panel is confident that they will be of invaluable service to the United Peacekeeping Republics.

No Charge for the Evaluation

(Audio log recorded during Montana’s enlistment, evaluating his fitness for active duty.)
Montana: So I’m marching up the hill with a winter’s worth of firewood strapped to my back, and I’m thinkin’ “hell, it’s a beautiful day, I’ll take the west trail today” – shake up the routine, y’know? And I’m goin’ and I’m goin’ and then outta nowhere, BOOM! A hydebear, surly as hell and a foot and a half taller than me, and I remember, “Aw crap – I left my axe down the hill.” So, I just charge at this hydebear, thinking “what the hell, axe or no, I’ll just handle this with deez armz”, right?

So I charge at this thing, and I’m not even halfway before I realize he’s a silverback – y’know, the kind with those wicked-nasty poisonous deathclaws. I’ll tell you what, man, you wanna feel alive? Wrestle a silverback hydebear!

Does that answer your question?

Recruiter: Yeah, the question was, “What is your name?”

Recruiter: That a first or last name?

Montana: It’s my only name, chief.

Dear to Whom It May Concern,

Hi! My name’s Montana, and I think the UPR’s anthem sucks. Like, way hard.

So I got some buddies of mine together to whip up a new one. And let me tell you, chief: we knocked it out of the park. Just nailed the hell out of it.

But then we got distracted, and we made a theme song for me instead.

It doesn’t really sum up the UPR all that well anymore, but I’d like you to consider it as an alternative anthem anyway. I mean, it’s got whipcracks! That’s awesome!

I’m sure you guys got a couple of laws to pass to make this official, so just lemme know when you’ve got all the details ironed out.

Now who’s that ridin’ in?
Is that his gun poppin’ in the wind?
Throw your hats into the air
It’s Montana

Atop his tiny legs he comes
Bringin’ ass-whoopin’s for all his enemies’ bums
Giant gun, smallish head
Cheerful as he fills maggots full of lead

Everybody Just Calm Down!

(Excerpt from the UPR Standard Armaments field documentation, chapter six, “Heavy Weaponry”.)
The standard issue UPR-MINI is capable of firing coolant-infused rounds, which serve to counteract heat buildup within the weapon’s barrels. One of the most common field modifications of the UPR-MINI is to circumvent the coolant dispersal governor (see chapter nineteen for documentation), delivering the rounds with enough coolant still in the projectile to “freeze” any targets hit.

WARNING: Despite the popularity of the practice, disabling the UPR-MINI’s coolant system altogether is NOT recommended and puts the user at risk of moderate to severe burns, loss of hair, and exponentially increases the chances of starting wildfires.