Feared even by members of her own faction, the unhinged and unpredictable Orendi channels powerful magic-like energies, striving to test herself against the universe’s greatest foes. She has more than earned the title “Chaos Witch.”

Unleashes a burst of energy that deals 75 damage and propels Orendi backwards from the blast.

After 1.5 seconds, summons a mighty pillar of shadow and flame at a target location, dealing 308 damage.

Conjures an intense blast of energy directly in front of Orendi, dealing 525 damage to enemies caught in the blast.

Orendi Video Guides by the Community

Orendi’s legendary gear is rewarded to the player when all lore challenges are completed. 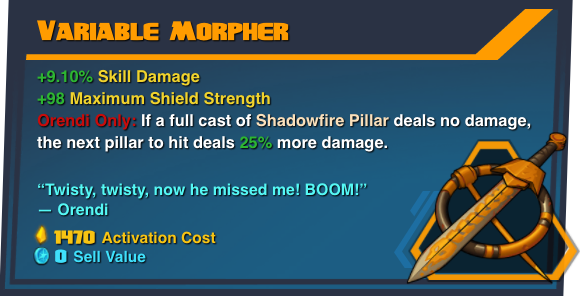 The Eyes Have You

It is with much frustration that I must submit this loss report and Fleet Insurance Claim for one Arcfleet frigate, Trade Vessel Bizymandias.

Upon FTL arrival in the Solus system, the trade vessel detached itself from the Arcship Noctoo and set course for the Detritus Ring with much haste and a great expenditure of firepower. While sensor scans indicated no biological life inside, it is suspected that a recent extraction from Etra, a varimorph named “Orendi the Chaos Witch”, has found a way to circumvent the scanners and stolen the vessel.

This suspicion is credited mainly to the graffiti etched in laser blasts on the Noctoo reading “ORENDI WZ HEER” next to a crude symbol best described as a stylized human eyeball inside a ball of black flame. This symbol has come to be associated with various acts of destruction and vandalism across the Noctoo during the last several months of travel.

Attempts to make contact with the Magnus or any of the Minion Robotics crew onboard the Bizymandias has resulted in a response of _NULL_LULZ. All contact with the ship was lost as it disappeared into the Detritus Ring.

It is my recommendation that no pursuit be made at this time, as economic forecasting models indicate the net loss of the trade frigate to be far less than the projected losses should varimorph Orendi remain on the Arcship Noctoo.

(Contents of a data file stored on the varimorph Orendi’s personal terminal, onboard the Nova.)

What’s the name of the hat, you ask?

That’s the name of my hat. You asked.

TOPLINE
Following is a summation of the collaborative evacuation of the Etran system, in which members of the Last Light Consortium (Arcship Wallywig) partnered with the Eldrid to extract a most circumspect and eccentric backwater race, heretofore known as the “varimorph”.

SUMMARY_VARIMORPH
Varimorph society is to be considered pre-industrial at best. However, the race has shown one of the most unique and inexplicable forms of adaptation we have encountered, which we’d recommended for study by the scientists of Arcship Sagagas.

While little is to be said for varimorph technology, their physiology is quite unique. As a species, the varimorph possess the ability to intentionally (albeit slowly) adapt at a genetic level, including the ability to develop biological analogues of technological constructs they find. Indeed, in our weeks of evacuation, we rarely encountered two varimorph who took similar shape or form.

Of the traits which could be counted as similar, we list these:
Alternating dark and light colored splotches on the skin
Wiry, dark hair
An utter lack of respect for any form of order or authority

Indeed, they are a most independent and rambunctious lot.

PRECAUTIONARY_REPORT_SUBJECT: “ORENDI”
Of the many varimorph who were extracted, one younger member of the species (known simply as “Orendi”) has flagged warning entries in several psychological evaluation minions. Her behavior is best described as “chaotic”, wantonly destroying LLC property for “the cackles” (her words, not ours).

Moreover, this four-armed miscreant has readily adapted her form, assimilating the internal workings of A1.Minion lasers into her hands, allowing her to control and channel energies more efficiently than the finely crafted weapons of Minion Robotics (reportedly, anyways – frankly, I don’t buy it).

Psy-profiling leads us to believe her at the very least capable of the possible criminal activities:

The Essence of Chaos

(There is a loud crash, followed by the sound of splintering wood.)

Male Voice: H-HELP! Get this thing offa me!

Gendarme: In accordance with Consortium criminal code, the subject is charged with the destruction of LLC property.

(Sounds of destruction are heard in the background.)

Female Voice: Security! Somebody! ANYBODY!

Orendi: SHUT UP! Order in the court or whatever!

(More cackling from Orendi, underscored by crashes and shattering glass.)

Orendi: Might wanna hold off on that for a sec, computer fella!

(Even more cackling from Orendi, accompanied by the sound of office equipment being hurled at a wall. A siren rings in the background.)

Male Voice: No… no, please!

(Sound of a heavy impact is heard.)

(The sounds of warping metal are heard as Orendi laughs, followed by splintering wood.)

(Clattering as a metal wall panel falls to the floor.)

Gendarme: Stand by for updated cha—

Gendarme: Stand by for—

Transcript of a looping transmission originating from the stolen Arcship Bizymandias, discovered abandoned in the Detritus Ring.
This is Orendi, the Chaos Witch, Arch-poombah of the Grand Federation of Captain Reyna’s Amazing Rogues of the DETRITUS RING.

I AM COMING! FOR YOU!

Is your name MISTER or MISSUS VARELSI?

I. AM. COMING! FOR YOU! TO POP YOUR HEADS! I’ll SHOW YOU darkness, YOU FOOD-STEALING BRAIN-WORM BREEDERS.

I. AM. COMING FOR YOU, you STAR-SUCKING wanna-be DORK LORD! I will drink your eyeball juice.

Is your name Toby?

Actually, you’re really cute. I won’t come for you, but I’d really like your autograph. Seriously. Much love.

SHADOWFIRE PILLARS FOR EVERYONE ELSE!

Orendi: everybody’s favorite four-armed menace to society, despite little being known of her personal history or the varimorph race in general. To that end, here is a glimmer of insight into the Chaos Witch and her people: the varimorphs are perhaps most famous for their ability to alter their DNA and physiology over time. This allows them to replicate certain technologies and traits through observation alone, even without understanding the underlying mechanism. However, the speed, accuracy, and complexity of morphing ability varies with the individual—morphing is an inherent trait, but also a skill that can be honed.

Their tribal culture is intensely distinct, and though most remain somewhat humanoid (for ease of communication with other races), there are a few “fringe” tribes that morph into wildly different, more “alien” forms. Of course, now that Etra (the varimorph star system) has been darkened, few tribes remain intact. Many established tribes’ forms were discarded to better adapt to new circumstances, while others were scattered during the evacuation (jointly carried out by the Eldrid and the LLC).

It was during her extraction, led by a Hemsworth expeditionary force, that Orendi first encountered Marquis and Phoebe. “Unstable” at the best of times, Orendi strongly objected to being “abducted”. For her “own safety”, her rescuers were forced to subdue her in order to get her safely off-world. Following an altercation with Marquis upon her waking (involving heated exchange of the terms “hobo” and “slaver”), she and the butler D’Caliber got off on the wrong foot, sparking a hatred she would go on to fan for the rest of their reluctant co-confinement aboard the Arcship Wallywig, and later, Nova.