Pendles is literally a cold-blooded killer. Originally from the ocean world of Akopos, Pendles did as most adolescent Roa do and left home to experience galactic cultures, and enjoyed murdering those cultures so much that he never went back. Upon finding out that people would actually pay him for his hobby, he became a freelance assassin for anyone with even the smallest of grievances. Don’t let his sweet pair of sneakers fool you. This assassin will sneak up behind you, poison you, eviscerate you with dual kamas, then slink away again in a blink of his one remaining eye.Despite misgivings toward his moral code, Ghalt eventually decided that it would be more dangerous to have him off the team than on.

Pendles’ primary attack utilizes his Dual Kamas in a flurry of strikes, while his secondary attack hurls a ranged Throwing Star.

Pendles throws a Smoke Bomb at his feet, dealing 75 damage and an additional 90 damage over 2 seconds. In addition, it instantly cloaks him, activating Corner Sneak.

Pendles applies poison to his kamas and viciously strikes enemies for 208 damage, heavily slowing the target for 2 seconds.

Pendles covers himself in an airborne poison that deals 292 damage over 10 seconds. While Miasma is active, Injection’s cooldown is reduced.

Pendles’ cloak activates when out of line-of-sight of enemies. Pendles’ movement speed increases while cloaked, but decreases while uncloaked.

Pendles Video Guides by the Community

Pendles’ legendary gear is rewarded to the player when all lore challenges are completed. 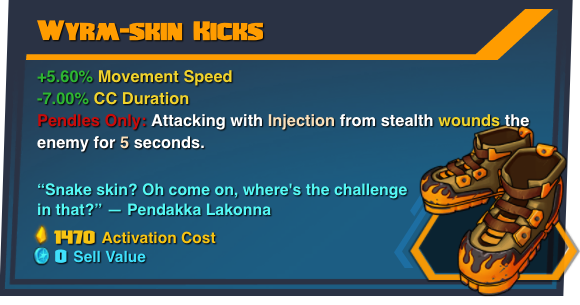 Hi, Ms. Valeria! It’s Toby! You know, your loyal, mech-clad follower! You probably don’t remember me — after all, you’ve got a lot on your mind and meet a whole lot of people in a given day, and on top of that I’m not altogether memorable, and just — look, just look up my holonet profile if you need a refresher. I’m sorry for the long preamble. And I’m sorry for apologizing just then. (That one too.)

So! Per your directive to be on the lookout for any mercs that might benefit from permanent employ in the Rogues, I wanted to get someone on your radar. His name is Pendakka Lakonna, but he goes by Pendles, and boy, he’s a super swell guy. Courteous, professional, and one of the sharpest assassins in Solus. He’s running an outfit he calls Executive Executions, and he’s got a great referral program — if you hire him, I get a free hit, on the house! And I know EXACTLY WHO I’LL USE IT ON. (Not you, naturally. I’m VERY satisfied with my job. Also, you’re the best, boss!)

The records are a bit on the spotty side, but what I’ve managed to dig up on the guy is pretty remarkable: his race, the Roa, comes from Akopos — and if that name sounds familiar, yeah! It’s the same ocean world that the Eldrid monk Alani hails from. Did you see my report on her? Was it too long? Sorry about that. It was probably way too long. He’s been making a heck of a name for himself since coming to Solus, assassinating left and right like it was going out of style. I think out little outfit would really benefit bringing him aboard — if for no other reason than occupying his time so he’s not hire to kill, you know, one of us. See my attached report for more details, Ms. Valeria!

// ENCRYPT_LVL: PSHEncv.Sx971 — PERSONAL_NOTE — VALKYRIE //
// Toby’s got a good eye for killers. I worry about that little squirt.
// That being said, I think he’s onto something here.
// If this guy’s as lethal as this report indicates, we could definitely find a use for him.
// And as Toby says, better with us than against us.
// END ENCRYPTION //

I know you’re still mad, it’s just — really, how often do I get to explain what pants are? Of COURSE I’ll have a little fun and say you wear them on your arms. Honestly, it’s like you’ve never heard of a practical joke before, which… On second thought, I suppose you actually haven’t, being stuck on Akopos your whole life.

That’s actually the reason I’m writing you. I was hoping I could plumb you for information about my people, specifically our life-cycles and why my scales are falling off like bloody parade confetti. Cheers!

We learned much from the Roa, but they shared very little about their own lives. I only came in contact with Elder Roa who had made their final transition long ago.

You were only supposed to be gone from Akopos for a few years. Maybe you’re just becoming an old snake?

That’s precisely what I’m worried about, love — I ain’t keen on losing me limbs. Poncing around like a giant eel is all well and good on an ocean world, but we’re in the middle of bloody space! I can’t expect to keep business up if I can’t even walk!

Your nanowhatzits — they can regenerate cells, right? Help a fellow sea buddy out.

The best I could hope to do is to stall the transition — I can’t undo any progress it’s already made. Have you shown any other symptoms yet?

(Advertisement broadcast across unencrypted channels in the Solus system, intercepted shortly following the Darkening of Penarch. Audio attached, transcript below.)
Denizens of Solus! Ever have one of those problems that you just can’t solve on your own? Trouble with the boss, disputes with a neighbor, or irreconcilable differences with a spouse and their lucrative life insurance policy?

Have you ever thought to yourself, “Gosh, I could make this all go away with the judicious application of cold-blooded murder, but I’m a bit too soft-hearted to swing the axe m’self”? Then you need to call on Executive Executions!

I’m Pendakka “Pendles” Lakonna, sole proprietor and star assassin of EE, and I’m here to tell you that there isn’t any problem that a good ol’ fashioned assassination can’t solve. And after scores of successful hits all around the tattered remnants of the cosmos (and the darkening of my home star, of course), I’m bringing my tried-and-true-services to Solus!

Sure, the universe may be endin’, and that’s a big problem for all of us — but that doesn’t mean we don’t have all kinds of little problems that still need solvin’ and throats what need slittin’. And those problems won’t be comin’ back once I’m through with ’em! That’s the Pendles Promise! Trademark pending.

Once you’ve contracted with Executive Executions, you can rest assured that you’ve hired the most cold-blooded, black-hearted killer in the cosmos — and that killer’s commitment to customer service? Second-to-none.

We take all contracts, without exception — no target is too big, too small, too elderly, or too adorable! So why stand around waitin’ for the object of your hatred to expire of old age? Take action! Call on Executive Executions today and bury those problems six feet under!

A pair of single-hand sickles, ideal for quick slicing and disarming — but why take their weapon when you can take their head?

Benedict here. I just heard talk that you’re thinking of bringing on that Roa, Pendles. Ain’t going to question your judgement or nothing, but there’s something I think you should know about him.

About 15 years ago, I was still hot on the beak about what happened on Menneck-B, so I did what I always do and found somewhere dark that served Old Corusca nectar by the tureen. No idea how long I was there, but I’m sure the establishment in question wasn’t too far from charging me rent.

You know me, I talk. I talk when I’m glad and, boy, do I talk when I’m mad. Everyone in the joint was getting an earful about how much I hated my old MSBC commander, this old Kormiri son-of-a-hen, and nodding politely, because that’s what you do when a nectar’d up Buteonen with a rocket launcher tell you a story. The only one who I could tell was actually listening was this kid.

He didn’t look like he does now, still had both eyes and tentacles for both arms. Wasn’t all dressed up the way he does now. He was really quiet, just taking everything in around him. He looked like it was his first time out of the pond, and it turned out it was. I was spewing all sorts of stuff, real dumb talk, the kind you only get from an Aviant who thinks he’ll never fly again. What I might have said — what I hope I didn’t say, because then what happened next wouldn’t be my fault — was something like, “I wish that tenderbeak bastard was dead. Really! And I’d buy a round for whoever got him, too.”

Well, anyone normal who hears that laughs it off, knows it’s all bluster. But this must have been his first time out in the wild, you know? It’s like that Magnus who they told to make paperclips at maximum efficiency. Chewed up an entire star system and its population before they could shut him down. Someone just wanted cheaper office supplies and ended up killing four billion people.

So this kid hears me — supposedly — say I want my old commander dead, get up, leaves the establishment. A few hours later, he walks back in. He’s got a limp. His left eye’s burnt up. And he’s holding something.

That Kormiri bastard must have put up a hell of a fight. He was a thirty year veteran of the MSBC, and Scales there took him down — unarmed. Thought he was fulfilling a contract. Obviously, I freaked out. I told him to get out of the system before the Peacekeepers started looking for him, or worse, connected me to him. He tried to give me the old Pel’s head and I told him to take it with him. He thought I was saying it waswas a trophy.

Few years later, I start seeing these ads. He’d gone pro. Made a business for himself. “Executive Executions,” he’d called it. Now I ain’t one to judge the love of killing, Ghalt, but you just watch yourself around him. And don’t ever, EVER ask him for a paperclip.