Verod Rath is not a vampire, though he gets that a lot. Rath is a master bladesmith and swordsman of the Jennerit Empire, once a member of the Keepers of the Blade — the elite guard of Empress Lenore. Rath is deeply focused on the art of battle, applying his three energy blades with lethal efficiency.

Rath is kind of like a cross between a samurai, a vampire, and a Sith lord. This katana-wielding warrior was a member of the elite guard that protected the empress of the imperialist Jennerit Empire. However, political infighting left him disillusioned and eager to get back to honing his combat skills on the frontlines. As a member of the Jennerit’s elite upper caste known as the Sustained, Rath is immortal, but can still be killed in combat – though with three separate blades and some devastating melee-focused abilities, that’s not a likely scenario.

Rath’s ceremonial Jennerit armor is sturdy enough to absorb plenty of damage, but light enough to preserve his speed and mobility.

Unleashes a shock wave, extending directly ahead of Rath, dealing 141 damage and knocking enemies up into the air.

After a brief wind-up, initiates a whirlwind attack lasting 3 seconds, dealing 69 damage per hit to enemies in range.

Rath Video Guides by the Community

Rath’s legendary gear is rewarded to the player when all lore challenges are completed. 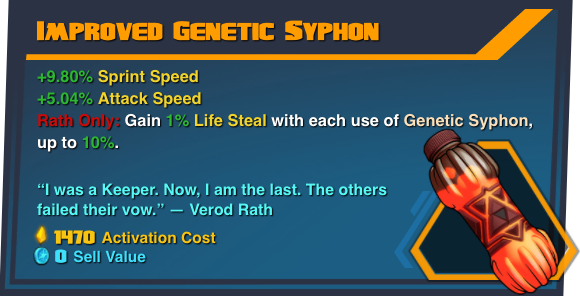 ARMAMENT EVALUATION
from The Red Observer on 19207 C.R. the 101st day
to The Distinguished Elder Mossire
Concerning “The Nature of Jennerit Sustainment”

Since the last time we spoke, I have made a few noteworthy discoveries as to the Jennerit Sustained from my observations of the Jennerit Keeper known as Verod Rath.

First – As is easily observable, the Sustained do not seem to age naturally.
During the time in which I have tracked Verod Rath, I have intercepted communication between Rath and the other Keepers. These messages confirm that Rath is well over 1,400 years of age. Moreover, I have confirmed through Jennerit Imperial records that several of the Keepers have aged beyond 18,000 years, though they appear as if they have not aged a day since they were Sustained.

Second – The Sustained are preternaturally fast healers.
Something about their physical substructure allows them to heal by drawing energy from surrounding living organisms. I have witnessed Verod Rath do this on numerous occasions while battling other biological beings.

Third – Verod Rath is exceptionally hard to kill.
Through my active observation, I now know him to be nearly impervious to most small arms fire, resistant to many poisons and toxins, all but incombustible, and is seemingly immune to asphyxiation. I will not describe here the incidents required to gain this knowledge, but safe to say, my information is personal, accurate, and Observed.

CONCLUSIONS
If Warmaster Rendain were to utilize Sustained troops in the coming war, our attack of the Jennerit Empire would be at a severe disadvantage.

Give my best to the Arbiters of Being. They have hard battles ahead.

Excerpt from
“On Verod Rath, former Keeper of the Blade”
Exodus Seat of the Spymistress
19957.325

The story of Keeper Rath is but another dark mark upon our once glorious Empire.

Rath has become a force of retribution, of vengeance born in wrath birthed from Rendain’s betrayal.

As you are well aware, my Empress, Verod Rath has a long record as a dedicated guardian, not only serving as your personal guard for over 1,400 years (Codex Standard Reckoning), but also crafting the phasic blades used by the other Keepers of the Blade in your service.

Still, even Rath was susceptible to the tyrant’s deception.

You witnessed with your own eyes the fruits of Rendain’s lies. The Keepers were twisted against you by Rendain’s scheme, Rath included, and in doing so made it possible for Rendain to complete his betrayal and retain many loyal followers within the inner circle, despite the civil war within the former Empire.

Rath believed this fiction painted by Rendain for nearly three years, until I confronted him directly. After presenting to him the incontrovertible truth of Rendain’s lie, Rath was… upset. He found Rendain and demanded answers. When the Lord Commander rebuffed Rath’s demand, the Keeper snapped, drew Rendain’s own dagger, and plunged it deep within the tyrant’s abdomen.

This did not kill Rendain, as I’m sure you are aware. Sustainment, at times, has its inconveniences. Knowing that Rendain would not die from this wound, Rath withdrew the dagger and fled.

Over the last several months, as civil war continued between the Empress-loyal Empire and Rendain’s militaristic Imperium, Rath has been seeking vengeance, hunting and killing the other twenty Keepers who remained in Rendain’s service.

From Rendain’s dagger and from the blades of the defeated Keepers, Rath has forged a new style of sword, a sword he has named “Precept”.

I believe, my Empress, that Rath is still loyal to the Jennerit Empire, and will be a great ally in the coming war to unseat Rendain from power.

(Overheard conversation between Rath and Deande, aboard the Nova following the defeat of Lothar Rendain. Audio attached, transcript below.)
Deande: Rath.

Rath: Deande. It’s not your shift yet.

Deande: Yes, well, I’m not used to resting without the specter of impending death hanging over me. I need some time to adjust to… you know, hope. May I join you?

Deande: Thank you. Not everything you hoped it could be, eh?

Deande: In the days before our assault on Tempest, slaying Rendain was all you could think about. Now you’re hardly sleeping. Quests for vengeance are loathsome burdens, aren’t they?

Deande: I have no doubt that you are. But you have to come up with some kind of plan, Rath.

Rath: Hmph. Not used to thinking about it.

Deande: None of us are. Hell, Kleese is scrambling because he didn’t bother renewing our LLC emergency transport contract. He figured we’d all be dead.

Rath: How optimistic of him.

Rath: I bested Rendain, Deande. The tyrant of our age. He’s rotting in infinite, unbearable banishment, and yet all I can think of is his wretched face. I think of nothing else! I appear to be broken, Deande. I don’t know how to live in this new world you’ve created.

Deande: I’d be concerned if you WERE sleeping well. But what comes next is up to us. In the meantime, I recommend a hobby, Rath. To get your mind off things. Something related to swords and fighting.

Rath: Hm… I do like both of those things…

Deande: Doctor’s orders. Don’t worry, we’ll still have plenty of problems to solve. Rendain was only the first. You’ll always have a place among us, Rath.

AXIOM & PRAXIS
Twin phasic energy katanas; standard weaponry for the Keepers of the Blade. The phasic edges have variable edge breadth and are powered with energies capable of sub-atomic levels of “sharpness”. (Slicing of atoms with blades is inadvisable). Praxis is also capable of limited anti-grav, allowing it to be thrown short distances and recalled to the user’s grasp.

PRECEPT
Precept was forged from Rendain’s personal blade, blended with alloys from blades taken from fallen Keepers of the Blade, hunted and killed by Rath for their betrayal of the Empress.

Tuned to Axiom & Praxis, this two-handed blade draws in and amplifies kinetic energy from the motion of the other two swords. That stored energy can be redirected as powerful strikes used to render foes immobile in battle.

Thank You Letter from Caldarius

The blade is sufficient.