Teshka Elessamorn – nicknamed ”Thorn” for her short temper – was the last aelfrin child of her homeworld before it was darkened by the Varelsi. Thorn ranges the jungles of Ekkunar and beyond with her bow ”Kreshek” and her advanced Eldrid magic.

The voice of Thorn is done by  Caitlin Glass who also did some voice work for Borderlands the Pre-Sequel (Corporal Best, Brittonia, Elevator Voice).

Thorn’s devastating Ekkuni longbow can be augmented to increase damage, range, and accuracy. Ready and hold an arrow to charge it.

Thorn carries no shield, relying instead on rapid health regeneration to survive in combat.

Fires a horizontal swath of 5 arrows, each dealing 63 damage. Volley arrows ricochet off of world terrain.

Summons a field of corruption for 4 seconds. Enemies caught within this field take 43 damage every 0.5 seconds.

[ULTIMATE] WRATH OF THE WILD:

After a brief charging period, hurls a massive energy bomb that explodes for up to 525 damage.

Enemies hit with a charged arrow are highlighted and cursed for 8 seconds. Skills and charged arrows deal 25% additional damage to cursed targets

Thorn Video Guides by the Community

Thorn’s legendary gear is rewarded to the player when all lore challenges are completed. 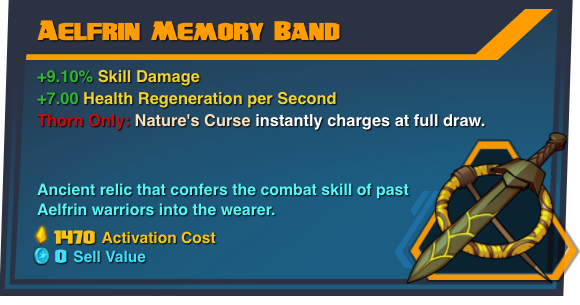 Excerpt from the Fifty-Third Archive of the Green Observer

…While the Aelfrin people will be remembered for many things – foul tempers, wide variety of hair colors, their predisposition towards wanton acts of vengeance – their most remarkable trait is their agility.

Many Observational reports point to the diverse range of exceptionally lethal flora and fauna native to Ekkunar as the evolutionary impetus for the Aelfrin’s uncanny agility. I, however, have a competing theory: that the Aelfrin evolution was driven chiefly by the unpredictable gravitic anomalies typical of Ekkunar – the same that would eventually tear the planet apart.

Indeed, one would be hard-pressed to identify a yet extant species in Solus that doesn’t possess one or two incredible biological advantages – those who survived did so for a reason…

(Eulogy given by Teshka “Thorn” Elessamorn following the evacuation of Ekkunar and the recovery of the Codex, dedicated to the Ekkuni Wardens who gave their lives in defense of the Eldrid.)
The Last Star weeps for you, sons and daughters of the Eshteni. For your sacrifice.

You have given what we all must give. You have denied the dark its claim. You fought, and you died, for our hope – and for this, you’ve earned a place in our songs.

But your story… your story that began in the heart of a burning sun… it will not end. It will only change. In the fertile soil of our homeworld, you will be reborn. You will become the trees, the grass. You will soar on the wind, borne aloft as a beetle’s wing. You will haunt these woods, and these woods shall tell your story.

You will endure. And because of your sacrifice… so will we.

Hunter of Shadows (Vengeance for the Lost)

ARMAMENT EVALUATION
“Kreshek”
from THE RED OBSERVER on 19654 C.R. the 11th day
to The Distinguished Elder Mossire

The Aelfrin longbow Kreshek (lit. “One Who Hunts the Shadow”) has a long and storied history among the Eldrid – particularly the Aelfrin warriors who repelled the Varelsi during their inaugural invasion of Ekkunar. It was during this battle that Kreshek’s considerable legend first emerged.

The weapon was initially wielded by Ilna, an Aelfrin war matron, whose arrows pierced the skulls (or whatever they have) of over one hundred first-wave Varelsi troops before she was struck down in battle. Minutes later, the bow passed to the ill-fortuned Kevin Mahoney, a visiting delegate from the United Peacekeeping Republics, who had never seen battle in his life. Mahoney loosed two arrows during his brief tenure as Kreshek’s ward: the first shot, which Mahoney did not aim, inexplicably struck an elite Conservator in the head, killing it. The second shot, this time aimed, ricocheted off a tree and killed Mahoney. He is remembered in the Observatory’s record of the battle as “handsome, but deeply unlucky”.

Reports are scattered, but our best accounts state that no less than six different combatants wielded Kreshek over the course of that single battle. Since then, the bow has been lost several times, broken in half (and later mended), and passed from warrior to warrior, each of whom gave their lives in the defense of now-darkened star systems. Briefly, the bow hung over the mantle of a Lorrian merchant, who thought it looked “wicked cool up there, especially when the fire’s going”.

The paired archer’s gauntlet is specifically engineered to function in tandem with Kreshek, fabricating arrows from trace elements in the surrounding air. The gauntlet is also capable of drawing latent energy from its wearer, shaping those energies into various hurled projectiles.

REPORT OF LINEAGE TRANSMISSION
from GREEN OBSERVER on 19897 C.R. the 30th day
Concerning “induction into Woodsworn”
of the Candidate Teshka “Thorn” Elessamorn

Following is an accredited genetic accounting of the lineage of Teshka Elessamorn, provided at the request of the Ekkuni Woodsworn as a required proof of heritage for their induction rite.

This report bears the authority and credibility of the seal of the Vigilant, Seat of the Green Observer.

The following entries are to be considered as fact, substantiated and accredited through the Eliim Genetic Archives of Codex, and have been traced through the matriarchal bloodline, as requested.

BACKGROUND FOR THE REQUEST
Teshka Elessamorn – currently known under the alias “Thorn” – was the last Aelfrin child born on the planet Eshteni before its Darkening. She arrived minutes before her parents were evacuated by joint UPR/Eldrid rescue operations.

Teshka’s family was relocated to Ekkunar along with many of the remaining Aelfrin refugees. There, she developed a strong relationship with a native Ekkuni dwarf named Boldur, who honed her natural skills of combat and survival.

Reports from Eldrid agents on Ekkunar indicate Thorn has shown innate talents towards the bending of energies. We believe that (given the proper gear and training), Thorn could hone this skill into combat aptitude.

(Letter found written on primitive “paper”, crafted from bleached and pulped wood.)
HALLO TESHKA, IT IS PADAPA (BOLDUR, IN CASE YOU FORGOT)!

It is vidanium root extract, and it is VERY POISONOUS!

But padapa is not trying to poison you, my little Teshka. No, this is metaphor for your strength.

A poisonous metaphor that you should not eat.

Vidanium root is very dangerous, little oak. Eaten raw, it poisons you. Boil it too long, it poisons you. Only those who know ways of the wood can share in her bounty, while outsiders get poisoned and die. In the woods of Ekkunar, even lunch time is perilous! BWAHAHA!

AND DO NOT EAT THE THING I ATTACHED WITH THIS LETTER!