Unlike his clone contemporary Oscar Mike, Whiskey Foxtrot (unit RDC-WF02-1221) originated from a batch of defective troopers, and is the last surviving member of his line. Rejected by the Peacekeepers, Foxtrot joined up with the Rogues after arriving in Solus.

Whiskey Foxtrot’s battered UPR armor still serves him well in battle – with a few modifications here and there, of course.

Hurls a grenade that sticks to surfaces and enemies. Detonates after 3 seconds, dealing 208 damage to nearby targets.

Fires a spread of shrapnel from the rifle’s underbarrel, dealing 141 damage and wounding them for 4 seconds.

Loads Whiskey Foxtrot’s Tactical Rifle with a clip of 75 bullets which can be fired fully automatically.

After each enemy kill, Whiskey Foxtrot’s attack damage is increased by  25% for 10 seconds.

Whiskey Foxtrot’s legendary gear is rewarded to the player when all lore challenges are completed. 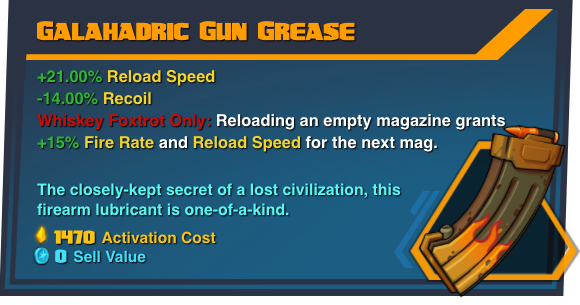 Some Find Me Repulsive

(Excerpt from a thread on “The Happy Lorrian” fringe holoforums, common communication channel for weapon smugglers.)
– ulorr4k – 2 days ago
@wf_2201: Package is inbound. Let me know what you think.

// ENCRYPT_LVL: BioG.v.H33 – PERSONAL_NOTE – FANOFTHEEMPIRE //
// ALLOW_VISIBILITY: wf_2201
// I thought you would take more care than to entrust a Lorrian to make
// delicate equipment modifications. All you get out of that is ugly. And I’m
// not talking about the Lorrian merchant. That gun is a hideous piece
// of work that no self-respecting warrior would bear.
// You, on the other hand… I would gladly bare you in a heartbeat.
// Shall we meet in our usual place?
// END ENCRYPTION //

In revisiting our bank of early galahadrim clones, we’ve discovered a subject that’s… suspicious. While this batch was due to be discarded, one particular specimen, subject WF02-1221, has proven hard to destroy. He’s quite wily, and, despite our best efforts, has evaded murder containment by even our best men.

While this degree of evasiveness is normally quite desirable among UPR recruits, WF02-1221 has been deemed unsuitable for joint operations and will be reassigned to the UPR dining facilities – at least, until we figure out what do do with him.

// ENCRYPT_LVL: PSHEncv.Sx971 – PERSONAL_NOTE – VALKYRIE //
// Tagging this file so I don’t forget this one.
// He’s wild, but that’s how I like ’em. Another warrior for paradise.
// Have the Lorrian get him to the Detritus Ring, I’ll take it from there.
// Even like the ring of his name. “Whisky Tango Foxtrot”.
// Probably drop the middle name, though. I don’t like to dance.
// END ENCRYPTION //

(Audio log sent via anonymous channels to Oscar Mike, RDC-OM83-1101, by Whiskey Foxtrot, RDC-WF02-1221. Audio attached, transcript below.)
Hey Mike. It’s Whiskey Foxtrot. Stop freaking out. I know you’re freaking out, and I want you to, like, stop that.

Okay? We good? Good. Now listen up, because not everybody gets the opportunity to chat up a younger, dumber version of themselves. Here’s the rub, Mike: you’re an idiot. You were cloned from an idiot, and somehow, they made you even stupider in the process. You’re loud. You’re arrogant. You spit dumbass catch phrases that you don’t understand. You watch too much TV. And you spend way, WAY too much time cleaning and talking to your gun.

I get that I’m something of a celebrity to you, because I’ve been out there, kickin’ ass and takin’ names, and against all odds, I’m not dead. And you wanna know how I pulled that s**t off? I smarted the hell up. Talked less. Thought more. And if you do the same, you might live to be as old as I am.

Ain’t many left of us RDC troopers, Mike. I guess that means we gotta stick together. So take this advice, and for f**k’s sake, don’t forget it: keep your mouth shut, your head in the game, and your eyes on the objective.

(A series of graffiti etchings on the stall of a men’s privy on the Detritus Ring chunk Betelget.)
How many Mikes does it take to change the plasmite in a shard pad? None. They’re too busy dying elsewhere.

Two Mikes enter. No Mikes leave. No one told them to, so they stayed inside. Stupid.

What do you get if you cross a Mike and a zombie harresburra? One brain. (Hint: it’s not the Mike’s. But I wish it was. Because then the zombie harresburra might attack him and eat his brain. I would pay top credits to watch that. Oh yeah I would.)

I once tried stand-up comedy to pass the time. I told a joke, then dropped the Mike. He didn’t get back up because I crushed his neck with my boot.

A Mike, a King Mike, and a Queen Mike walked into a bar. I shot him. All three of him.

RDC-WF02-1221 is WANTED for desertion of his post in the United Peacekeeping Republics. Subject should be considered ARMED and DANGEROUS and ANGRY.

WARNING: DO NOT LOOK AT HIS FACE. ANYONE WHO LOOKS AT HIS FACE WILL BURST INTO FLAMES. (UNCONFIRMED)

Send this to a friend