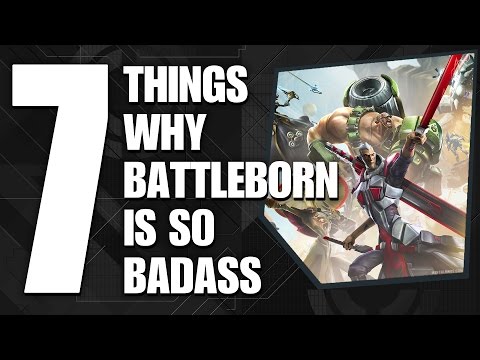 Battleborn has a unique story setting, it takes place near the end of the universe. As all the stars in the galaxy have gone dark except one, all species capable of space travel have gathered around the last star. An evil force called the Varelsi are consuming one galaxy at the time. The remaining species  have to put aside their differences and join forces to stop this evil attack.

Battleborn will feature 25 playable heroes that will  ship with the game. Divided over 5 factions each of these heroes  comes with a unique design and play style.  Yes there is your basic space marine and your heavy minigunner, but Gearbox is supplying more with Battleborn. A Hawkman that can glide through the sky, a mushroom that throws kunai, dwarfs,butlers,elves and vampire like characters. With Borderlands it was all about the guns, with Battleborn it’s all about the heroes and their different playstyles.

Battleborn is like Gearbox previous title Borderlands not going for a realistic look. The art direction  is done by Scott Kester and while every character is from a different part of the universe they all fit together. The artstyle of Battleborn is a mixture of Japanese Anime and western Animation like Pixar. Visually the game is a spectacle, there is a mixture of 2D and 3D effect.  For the 2D effects Gearbox brought on an industry veteran, Michel Gagne, who worked on The Iron Giant, Brave, and the Star Wars: Clone Wars television series.

Although the setting of the game is quite dark the tone of the game isn’t. With the Borderlands games Gearbox Software proved that they can make a fun shooter. While taking on serious topics they seem to put a twist on things that makes it entertaining. With Battleborn they also didn’t take things that serious and that makes for an more entertaining game. But it also let’s you do more crazy things with the gameplay as this doesn’t have to be 100% realistic.

“Above all, video games are meant to just be one thing: Fun for everyone.” – SATORU IWATA

There are multiple ways to level up in Battleborn. One of them is your Helix Skill Tree that will boost and augment your characters abilities. This one resets after each match so you can try out new builds and pick your skills depending on the match you are playing. A advantage  with PvP multiplayer is that everyone starts at a base level. Another leveling system is the Character rank. As you play as an certain hero you will level up that character and unlock cool new stuff for that character, like new skills, skins and taunts. A third leveling system is the command rank. This is your player profile level that means you won’t have to play a specific character for these bonuses, which include titles & gear.

Battleborn features a loot mechanic. During your play session you are able to earn Gear packs. These will give you random gear that you can bring along with each mission, as they will boost you  or your team.  Battleborn is running on the Borderlands loot system, so expect tons of gear to collect.

You can play Battleborn alone or with friends as it has an coörative story campaign where you can play missions with 4 friends. Also you can bring those friends over to the multiplayer. Here you and your friends can duke it out in different 5 versus 5 game modes. Defend your base while attacking the enemies base in Incursion. Or escort your minions to the grinder while withstanding enemy attacks in Meltdown. And then there is Devastation where you have to take control of specific locations on the map. So fun for the whole family!