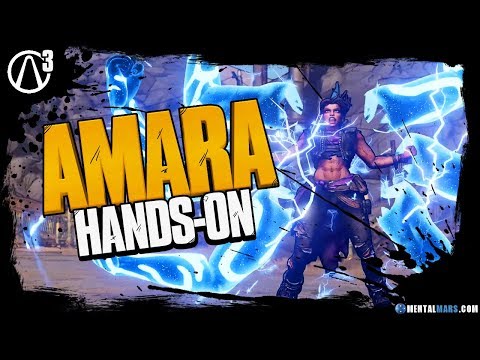 During the Borderlands 3 gameplay reveal event, I also got to play with Amara. She is one of the six sirens in the Borderlands universe. Like all the other sirens Amara has mystical powers. These powers translate into her 3 action skills. You can choose between Phasegrasp, Phasecast, and my favorite Phaseslam. Unlike Zane, Amara has various augments that are not specifically designed for a specific action skill. Therefore you can pick up augments from one skill tree and use them on an action skill that’s from another skill tree. Amara’s action skill augments are being regulated by various augment slots that you can equip. With Zane, all the augment icons have the same shape. With Amara, the augment come in various shapes. This way you can only equip 1 augment of a specific shape. While you can use augments from other skill trees, you cannot stack certain augments. The diamond augments change your elemental type, hexagons add an ability to the action skill from that tree, and the arrows add a game changer to the action skill.

Amara’s skill trees focus on elemental damage and close-up combat. Usually, I prefer my mid-range play style, however, with the updated combat experience I enjoyed Amara’s close-up combat. By picking up the Phaseslam action skill, health regeneration, and close-up damage boost I was able to wreck those Maliwan troops. By running towards them and sliding around their cover I managed to get in close and sneak attack them. If your action skill is charged you can use it to get the jump on the next guy. All-in-all a lot of action-packed close-up combat which I really enjoyed. While the Borderlands 3 marketing isn’t using the term badass this time around, I did feel like a badass and that’s something I’m looking for in a Borderlands game. I find the over-the-top gameplay experience very enjoyable.

The third skill tree is a combination of both elemental damage and close-up combat but uses a stacking mechanic to build up the boosts. Personally, I have always stayed clear of these types of stacking skills in previous games. I prefer my fixed boosts so you know what you have instead of, I have to do this thing before I can benefit from the other thing. This makes them less situational. Therefore I like the fact that Zane can trigger his kill skills. This way you don’t have to struggle to get your first kill before you can wreck the rest of the opponents.

Like Derch, I’m not a big fan of the Mailiwan weaponry at the moment. This is kinda weird because it’s my favorite manufacturer from Borderlands 2. I guess we haven’t really found a good Maliwan weapon In Borderlands 3 that we like. Most of them have this charge-up mechanic which isn’t ideal. That is usually something you see with mini-guns. Another thing I didn’t like about my play session is the weapons swapping.  Because with the controller set up the only way you could swap weapons is by pressing the ‘Y’ button on the Xbox controller. It felt like Russian roulette to me. You were not able to quickly select guns by assigning them to the d-pad. With Borderlands 2 I always had my preferred gun under the quick select option. Each direction had a weapon with the required elemental type for all the different types of enemies. This wasn’t the case this time around. Weapons having multiple elemental types also didn’t help. Because I got confused about which weapon did what as I had 2 of the same type of weapons that both had cryo at option 1 but a different element on option 2. So after a little while, I opted for Jakobs weaponry because of its raw power. Therefore I didn’t spec into the elemental tree as I didn’t find this very useful in my limited time with the demo.

The Phaseslam reminded me of the Punch skill that Attikus has in Battleborn.  You jump forwards into the air and slam into the ground dealing massive damage. Although the range is a bit shorter than the one from Attikus, the slam itself looks to have more of an impact due to the visual presentation. I like how this action skill keeps your forward momentum if you decide to focus on a brawl play style. As I mentioned above, it’s cool to slide your way around the combat zone to get in close and deal that damage to finish it up with a powerful slam.

The Phasecast action skill is somewhat like Orendi’s ultimate skill from Battleborn. You shoot an energy projectile forward that deals pretty substantial damage. There seems to be a bit less charge-up time compared to Orendi’s blast which is a good thing. I did hear some mixed opinions about this skill as it isn’t always clear through which obstacles it can travel and which not. Personally, I didn’t use this skill that much as it didn’t appeal to me at the time. It sounds pretty useful to use on those tougher enemies.

The Phasegrasp is a similar move to Maya‘s action skill from Borderlands 2. With this ability, you can lock enemies in place which is useful to give yourself some breathing space in combat-heavy areas. With this one I was like, yeah I have seen this before but it’s still a very useful skill that lets you take control over the combat zone. I have switched to this action skill multiple times just so I could lock down those heavies. This time around there are some different augments to make the skill even more badass. If you cannot lock down an enemy with this skill then it does immune damage.

For now, I really liked the  Brawl skill tree. She seems to be a real powerhouse that will clear out any combat zone. I think you can do a lot of cool stuff with Amara but I need some more time with the game to get a full grasp of her true power. Because I was playing her as a close-up brawler I definitely noticed I needed the health regeneration, that’s something I didn’t need while playing mid-range Zane. Amara is already a fan favorite, she is high up in the polls. Personally, I don’t think she will be my starting character because I prefer Zane the Operative at the moment. Amara seems to be more action focused and I tend to play a bit more relaxed after a day at work.

During the Borderlands 3 Gameplay Reveal Event, I was also able to get some hands-on time with Zane.