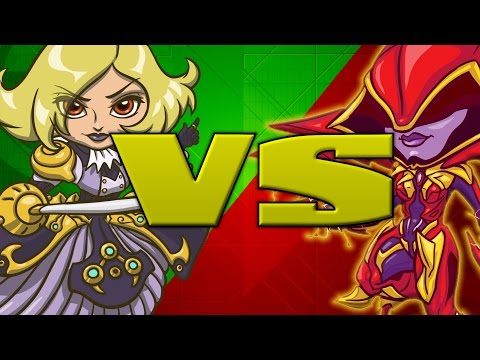 On my first Phoebe play session i’m directly diving into Attikus and the Thrall Rebellion at the MAX amount of OPS Points.

The last time i played Phoebe was during the Closed Technical Test back in 2015. Back then she was known as OP Phoebe because se was so strong and overpowering every other Battelborn hero. As Phoebe didn’t had a good counter character in the CTT she became very populair. It was kinda like we have now where everyone want to play that new released hero but without having chaos rumble to help us out. But getting back on track, the only time i  played Phoebe during the  official release was to make the Battleborn Teleport video and the Battleborn Jump Pad video. So i don’t really have any play time with Phoebe so far. The things i remember  got patched out because of the balance issues as Phoebe was OP.

For my gear load out i just picked some stuff that i thought was good, but looking back at it… it wasn’t all that great.

But for my first run and at the 100 OPS Point level i think i did a good job at surviving the battle against Aria in the story operation, Attikus and the Thrall Rebellion.