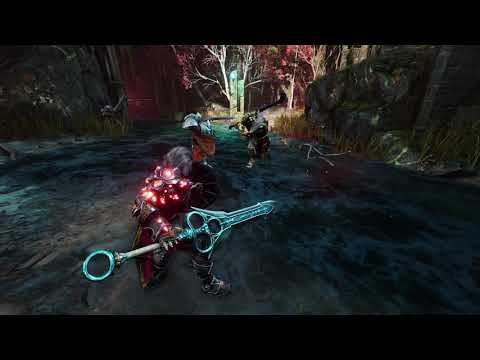 It seems that Counterplay Games and Gearbox Publishing are responding to community feedback. The Combat Overview Trailer that was released during Sony’s State of Play event did a great job of explaining what Godfall is. However, the combat in the gameplay was underwhelming. Fans quickly started expressing their concerns about the combat and enemy AI. The opponents in the trailer were standing still and would only walk toward the player when they were attacked. Also, the fight against the Mid-Boss didn’t deliver a spectacle.

This short teaser shows that Godfall is an action-packed melee combat game. The teaser clip that was shown on Twitter and Facebook quickly started getting requests for a 4K version of the clip. You asked, and Gearbox and Counterplay Games responded with the video above.

This clip appears to be from a newer build. The Combat looks great. The enemies appear to put up a fight. The light soldier quickly falls but the heavily armored guard isn’t a pushover. The player dodges the slam and utilizes his shield to make a comeback and executes a ground finisher.

Then there is an archer in the background that keeps shooting arrows. They seem to deflect from the player’s shield. As the 2 soldiers are defeated 2 portals appear in the background and a new wave of enemies appears on the combat field.

The player has the Silvermane Valorplate equipped and uses a 2-handed Greatsword, which is one of the 5 weapon classes. The Greatsword appears to be a bit slower than the balanced longsword. While slower, they probably deliver a bigger punch than their 1 handed counterparts.

By defeating his opponents we see 2 green items and an orange item drop on the field. These orbs are probably resources that you need to collect to unlock your Valorplates or upgrade your weapons.