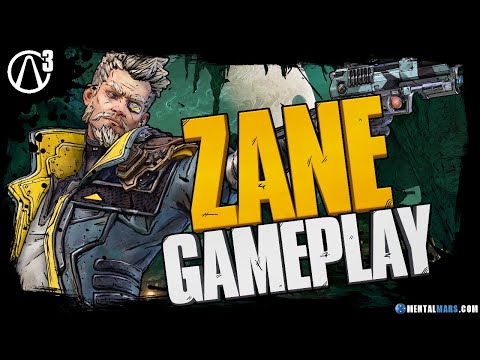 During the FL4k reveal event, I was also able to play a high-level vault hunter Eden-6. Since I already had a couple of hours of playtime with FL4K, I took this opportunity to play with my boy Zane. I got to play a brand new mission and meet up with a brand new NPC. At the beginning of the event, the gearbox software developers were glad they could finally show off Balex. Now that I have played this mission I can understand why they were excited about this reveal. When you hear Balex speak you might recognize his voice. This character is voiced by no other than ICE-T. He is really perfect for this character. Balex has an attitude while still having a comical note. During this play session, I had a few good laughs. Not just because of Balex but also a few of Zane’s responses got me going. Kudos to the wiring team over at gearbox and of course the voice actors for bringing it to live.

Besides enjoying this weird journey with Balex, I also enjoyed this load out of Zane. The cryo weapons were really effective. I had some fun sliding into frozen opponents. The rocket pods on the SNTNL drone look spectacular. FL4K may have pets but this drone is also a good little helper. I didn’t use Zane’s Digi-clone a lot in this playthrough. While I do use it as a decoy and stationary turret. I didn’t really switch places with it. A noteworthy thing that I want to mention is that I think that the Nova blast augment on the Digi-clone could really work on this mission. Because you get swarmed by a lot of enemies.

The level design on Eden-6 looks great. It’s something different than what we have seen on Pandora and Promethea. Also, the new enemy types are awesome. The Jabbers are monkey-like creatures that will climb up walls and attack you from all angles. An infestation of Ratches can become a problem. These bugs will feed on their fallen brothers and sisters. When you kill one another week try and eat the leftovers and then gain additional health. This boost can really stack up.

There is some mild platforming throughout this mission. Nothing really crazy. When you look at the level design you can see small highlights that hint at a ledge where you can climb up on. The thing that was challenging is the final boss of this mission. And that’s a good thing.