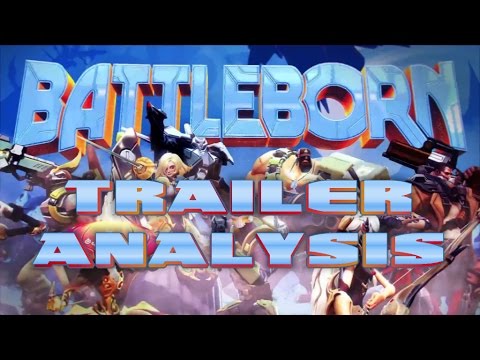 With the release of the Battleborn E3 2015 Trailer i thought i would look over all the hidden details Gearbox put in this trailer. But instead of doing a text version i thought it would be a cool idea to create a analysis video. So if you haven’t seen the original trailer go and check that out. This is my first  time doing something like this so bare with me.

For Every Kind of Badass

During this trailer we see some familiar faces making their return into the spotlight. Quickly we get introduced to  Battleborn characters like:

But is you look closely you might spot a few new faces during the Battleborn trailer. One of the first new faces we see is described as a “Cyborg Hawkmen” on the introduction of the official Battleborn website. Checking back to some earlier screenshot we have seen this character before but was never introduced by Gearbox. Looking at those images we can see that Hawkmen has been given a reskin. His armor has a different color and now features a star logo on his chest. This design looks like that of Montana & Oscar Mike, placing Hawkmen into the Peacekeeper faction. Hawkmen is one of the Battleborn that is able to fly and carries a big badass gun. In the trailer he literally  makes a n smashing impression as he slams into the ground. This kinda looks like the butt slam from Borderlands the Pre-Sequel.

I found out what the name is of our Cyborg hawkman, it’s Benedict. An 2K Producer was kind enough to share his current name but also his previous name. During the development process of Battleborn Benedict was called RocketHawk.  So we haven’t seen Benedict’s weapon in action yet, but his development names indicates ROCKETS !!!

After leaving the hawkman scene we see him dive with 3 other Battleborn, Thorn, Reyna,  and a mystery man dual wielding two badass shotguns. We know that these are shotguns because this character is also hidden in the back during the awesome still shot. If we freeze frame there we can see the pellets coming out of his gun, this definitely is a spread shot of a shotgun. Gearbox is definitely teasing with this character until we reach the end of the trailer where there is a character line up. Looking on the far right there is a big guy in a brown jacket wielding a those badass shotguns. This character design let’s me think he is one of the rogues.

Another mystery solved, i reached out to  the development team and showed them my Analysis video of the Battleborn E3 2015 Trailer. They could confirm the dev.name of this mystery man and it’s  Papashotgun. He also stated that he indeed is a Badass! With this acquired info i went into  research mode and did a whole analysis on  PapaShotGun

This one was one i didn’t see coming. During the first gameplay footage of the co-op campaign Creative Director Randy Varnell talks into the mission at hand. He says that Mellka also tags along during this operation.

We also got Mellka on the ground – Randy Vernell

We hear make an appearance during one of the echo communications as she is trying to decrypt the access codes. As her profile images pops up we get a look of her, dark skin, mohawk with a white highlight, elflike pointy ears. But this presentation was setup letting us think Mellka was one of the NPC in the game tagging along for the story. And just like with the Badass Shotgun guy, Mellka is also hidden in this still shot. Later on she also  makes an appearance in one of the cutscenes where one of the spaceships is taken down and crashes onto the snowy planet surface.  You barely get a good glimpse of her, but with the power of freeze framing this  icy image we can clearly see it’s her.

Another character Gearbox hasn’t introduced yet is Orendi , a Chaos Witch. We can see this character several times throughout the trailer. Once running in front of the group and later on during some gameplay footage we loop from Oscar Mike’s perspective and we see Orendi in action on the left side of the screen casting some chaos magic. Looking at the artwork  you can also spot  Orendi on the left side. The first impression i had was that this must be some kind of Voodoo Witch Doctor  and when Gearbox released a list with the first 10 Battleborn i knew i was right. The description that was placed by this Battleborn  exactly fitted this character.  There’s also some short gameplay footage from Orendi as you can see 4 hands casting magic spells. As the Eldrid faction is described as the magic wielders in the game i think Orendi will be one of them.

Orendi – Best described as a chaos witch, Orendi uses her chaos magic to bring unpredictable results to battle and to her enemies.

This last Battleborn character was real hard to spot because he is easily mistaken for a enemy. This Beast kinda  looks similar to the enemies shown throughout the trailer, he’s on the left next to Rath in the featured image above. But one thing that makes it even harder to interpret is that during his first screen appearance it looks like Montana is shooting at him. If you look closely you see him take no damage like the other enemies where the damage numbers pop-up. Montana is not shooting at the Beast character but he is adjusting his aim to the real enemy were Beastman is also aiming for. In the next cut you see Rath do his spin attack and once again Beasty doesn’t take damage. You do see some magic markings in front of his shield like he just casted a spell of some kind. Does this mean The Beast is also on the Eldrid faction?

Because of the angle and little gameplay footage showcasing this character, i first thought this was more of a gorilla (or Bullymong if you prefer Borderlands terms) like hero. But with the recent hands-on impressions i learn that ‘ beasty’ is actually a dwarf  character. His name called  Boldur and he carries a big Axe & Shield, he is part of the Eldrid faction.

A dwarf with a temper as short as he is, Boldur the Unbearable carries a hefty axe forged by powerful runes.

Then there is also this brief shot in the trailer. We look from Caldarius perspective based on the design of the weapon. But before we see Caldarius punch this enemy in the face we can spot a beam of light on the stairs in the background. Who produced this beam ? It looks like a magic spell but the characters that i could identify aren’t capable of these moves as far as i know. The Battleborn i could identify are Caldarius (point of view), Phoebe (left) & Rath (right). So i looked over there skill set that was presented on Game informer but nothing matched up. There is something up the stairs in the background , behind the beam of light. It doesn’t really move , although i find this a great spot for a turret this could be a hidden Battleborn character. It’s kinda a wild goose chase at the moment, it could just be a game changer from Phoebe’s skill tree that we haven’t heard about yet.

Looking at the new gameplay videos that are part of the first hands-on impressions i spotted some footage where Phoebe teleport from one spot to another. This special ability comes along with a beam of light as she reappears onto the battlefield.

Here we see the main villain of Battleborn or at least he is presented in that way.  Looking  at his  location i would guess something is going to happen on the  home planet of the  Jennerit Empire, Tempist.

@mentalmars Ah ha! We love it! You have a good eye and good questions. One thing we can give you – the 'Evil' guy is called Rendain. Spooky!