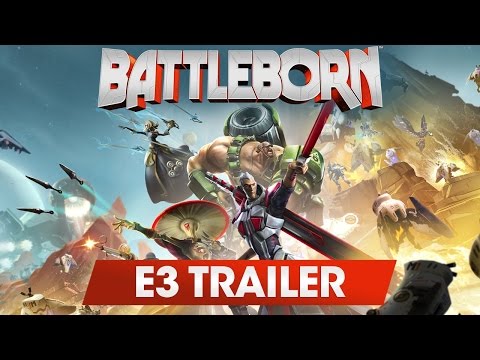 For Every Kind of Badass

After a 2  weeks of promotion on social media teasing us with little puzzle pieces we finally got a Badass Trailer.  This new footage of Battleborn shows of some familiar faces like; Thorn, Oscar Mike, Miko, Rath & Montana. But also some newcomers are brought to our attention, and they look… BADASS! Another thing to point out is that we see some different enemies in this trailer. The reveal trailer and the first gameplay footage showed of the minion & droid army produced by the LLC.

Battleborn features 25 unique playable heroes,  each with there own unique skills and abilities. The game contains a Story Mode where you have to save the last star in the universe from a mysterious evil hell bent on its destruction. Battleborn can be enjoyed Solo or co-operatively. Splitscreen goes up to 2 players while online co-op let’s you play with four friends.  Gearbox said the story is modular, which “allows players to replay missions for the chance to earn better loot.” During your playtime you level up the individual heroes’ Character Rank, as well as your own player profile Command Rank and  unlocking badges, loot and other perks.

Battleborn features also a competitive multiplayer experience where you can play 5vs5  across 3 different modes.

Incursion is the 5v5 MOBA like mode. With the Minions on your side you need to destroy the opponent’s base. Be warned you are not the only team with AI Minions.

This is the King of the Hill mode. You need to capture and control certain point on the map.

During a firefight you have to help your fellow Minions across the map.

Battleborn is scheduled for this winter on Playstation 4, Xbox One & PC