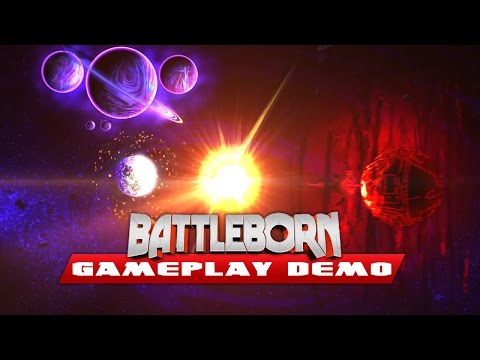 The E3 2015 presentation video of Battleborn that gives you an overview of the story, heroes and gameplay.

First of Kleese, one of the NPC’s that will guide you on your quest to save the last star called Solus, will give you the story behind Battleborn. How the universe died a lot quicker then expected, that a dark presence called the Varelsi  are killing of one star after another. That the final showdown will take place within the coming 6 hours. Then Kleese will introduce you to the 5 Battleborn heroes that we will follow during the Gameplay demo.

We will follow these heroes during a mission on Blizz, the icecold home planet of the Peacekeepers. As you have been dropped off by Kleese & Nova, the Battleborn make their way to stop the Varelsi portal. Here we get to see some new story campaign gameplay, as the heroes take on hordes of enemies and encounter a main villain Redain. From his spaceship Redain takes a shot at the Battleborn and drops in a Boss , Warlord Nix, for them to take out.

In the second segment the Battleborn have to escort a Spiderbot called Wolf. Wolf will have his own lifebar and is upgradable with an turret,shield or healing field. These upgrades will cost you Shards, a currency that can be collected during the mission. Near the end of the video the heroes will encounter an ambush by the Varelsi and need to takedown a badass. As the cinematic takes over the Gameplay demonstration ends and the video comes to a conclusion, but not until Kleese shows of some other playable characters.

Notice that the gameplay footage was captured during easy difficulty settings. Creative Director Randy Varnell states that the harder difficulty settings will deliver a more challenging experience. Also since the first Cooperative Campaign Gameplay Walkthrough  some balance changes have been made. The Helix Skill Tree has 10 levels now instead of the 20 showcased in that demonstration. Your ultimate ability will unlock at Level 5 instead of Level 7.

The chests can be opened or destroyed and will contain pick ups like restore health & shield. More power ups will be present in the game, so you might suspect pick ups like :