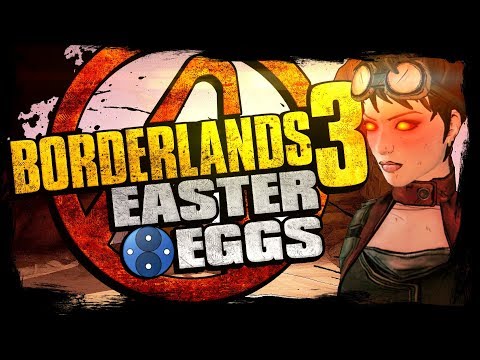 YES! We as a community have discovered all the Borderlands 3 easter eggs that Gearbox Software has been putting into the Battleborn Story Operations.  Although it has been a long journey tracking these down and decoding the hidden messages the reveal is mind-blowing. Last year we already found the Vault symbol graffiti referring to Promethea and these new details give us, even more, to speculate on.

The big discovery for me came with the release of the story operation Oscar Mike vs the Battleschool. During my OPS Points search I encountered a Varelsi Portal and from it came an odd bleeping signal. Even a Reddit post also pointed this out and I tried decoding it using morse code but no results and this post quickly died.

In the meanwhile, the community over at the GBX Forums were dissecting Toby’s Friendship Raid and have found out some very interesting stuff. They started pointing out a difference between the released content and the footage shown during the live stream. This triggered me to go and watch the stream again and when the GBX team was getting to the engine room I noticed another Varelsi Portal in the background. The odd thing was that the footage cut away from it once it got on screen and in the next sequence you see the developer looking away from it. They never interacted with the portal.

Because I never encountered any Varesli portal in the other story operations outside of Oscar Mike vs the Battleschool I didn’t know that it was a side objective. But after discovering that and recreating it for myself I could compare the two signals for myself and found out that they are different. So it wasn’t just a generic portal sound therefore I knew I was onto something. Because of all the background noise, I had trouble decoding the signal so I contacted lowlines if he was able to get a clean audio sample from the game.

However, even then we weren’t getting any good results using morse code decoding apps. Yes, I tried playing it backward, slowing it down, and layering multiple sound files on top of each other. So at this point, it wasn’t working out therefore we concluded that it might need to use a different code or that we needed all 5 signals for it to work.

We also considered that the Promethea easter egg was a piece of the puzzle. At this point, we had started posting our data to the forums to get some help unlocking the hidden message. Over the course of all this, some developers had started dropping some hints, while my portal theory was still yet to be confirmed these hints were in line with the path we were on. And our efforts paid off because this morning a community member broke the code, so shout out to “whatsmynameagain”. Where I was looking at the dots he was looking between the dots and when you do the message becomes clear. So each of the 5 story operations contains a Varelsi portal and therefore you get 5 hidden messages.

Attikus and the Thrall Rebellion

This is very exciting! So if the first easter egg wasn’t a hint this one points us even more in that direction. It looks to be that we are leaving Pandora in Borderlands 3 and go visit another planet or even planets. Because at the end of Borderlands 2 we get teased with a galaxy full of vaults.

Message #2: Children of the Vault (backwards)

CHILDREN OF THE VAULT

This message from Toby’s Friendship raid says Children of the Vault and this seems to me to be a call out from the Eridian. This would give some more context to the other messages.

Message #3: We Are Not on Pandora Anymore

WE ARE NOT ON PANDORA ANYMORE

Oscar Mike vs. The Battle School

This 3rd message tells us “We are not on Pandora Anymore” You can question who “we” is but I assume it’s the Eridian, but why did they leave and why do we have to follow?

Message #4: Tannis Is Not What She Seems

TANNIS IS NOT WHAT SHE SEEMS

Montana and the Demon Bear

So the message for Montana and the Demon Bear tells us that Tannis is not what she seems. Tannis was always a bit… …weird. But what secrets does she have? Is she our antagonist in Borderlands 3 even since we have been working alongside her all this time? PLOT TWIST!

Message #5: Do Not Open The Vaults

DO NOT OPEN THE VAULTS

Phoebe and the Heart of Ekkunar

Then the 5th message states to not open the vaults. WAIT WHAT that has been the whole point of these games right, we want the sweet loot. What evil is upon us? A Tannis on a Fish Invasion?

Well, what do you guys think let me know in the comments and I’m stoked to see what’s next in the Borderlands franchise.