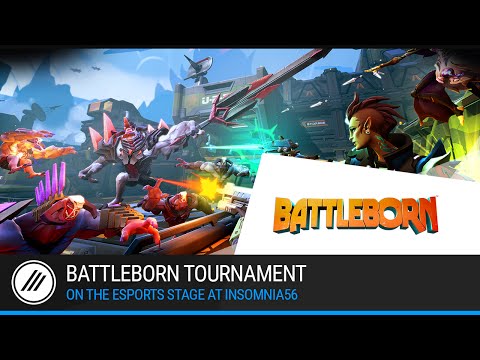 At the 56th edition of the Insomnia Gaming Festival in Birmingham (UK) there was a Battleborn tournament. The Battleborn invitational took place on the eSports stage on Saturday. Here some of the hottest gamers from YouTube and their crews played Battleborn’s competitive multiplayer mode Meltdown.

The tournament starts with an introduction by Battleborn Creative Director Randy Varnell. During the event he makes some returns giving several gameplay tips how to best play  Meltdown. This four hour show includes some good shoutcasters explaining everything that’s going on at the battlefield. As non of the players had a lot of time with the game they are still discovering the game. But during the course of the tournament players starting to recognize that Phoebe is a bit overpowered and make her a team favorite. As the teams get more and more comfortable playing the game the are starting to use the taunts so rub that kill in the face of their opponent.