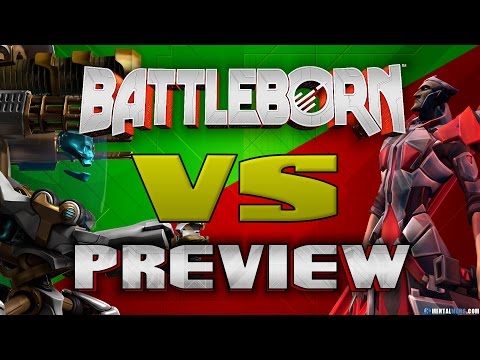 Recently I got an invitation to come and play Battleborn at the 2K office here in Holland. There I was able to play a new Battleborn multiplayer preview build. After having participated in the Closed Technical Test I was excited to play Battleborn again. Upon arriving at 2K I got a warm welcome and talked some time with Dennis from 2K. Once everyone had arrived there was a brief introduction of the game for those who hadn’t played the game before. Most of the participants had played the CTT or at a previous event. But before we dived into the multiplayer we got to familiarize ourselves with the controls in a story mode mission.

Phoebe players starting to call out “aaaggh who is playing Benedict?”

After both teams had completed the story mode mission the first multiplayer mode we played was Meltdown. Here you have to sacrifice those little minion robots to a delusional robot with a god complex. So what you have to do is, protect your minions across the map as they walk towards the grinder where they will be sacrificed. For every minion that you get across, you will receive points. The bigger the minion the more points you will receive. The other team does the same so you have to attack your enemy and their minions while making sure you get your own minions across. The first team that reaches 500 points wins. This mode is chaos and I’m loving it. You smashing their minions, they are smashing your minion, you hit them, they hit you, and between the battles, you are collecting shards so you can buy turrets that help you gain control over the battlefield. There is a lot of gameplay elements in play to keep you occupied. For my first game, I picked Rath the Jennerit swordsman. My first introduction to him was at Gamescom and this hero really surprised me. I didn’t think a melee character would work that well in a first person view but Battleborn proved me wrong. Rath is easy to pick up he is a fast and strong character, a bit low on the health side. But I wanted a hero that could quickly get around the battlefield. This way I could support my team in both lanes and go in aggressively and thereby smack the other team around the map. In the beginning, the battle was head to head but along the way my team was getting the upper hand and took the lead which the other team wasn’t able to recover from.

After the first match, the losing team was given a choice. Take revenge in Meltdown or try out the other multiplayer game type. They didn’t feel lucky so they wanted to try out Capture hoping to have more success there. In capture, you have to take control over 3 capture zones. Controlling one of these zones will give you points for every second your team owns it. The first team that reaches a 1000 points wins the match. This game type was a bit easier to understand. But I like the fact that capture was more than just taking control over these zones. I didn’t expect this but you could buy these turrets to help secure the capture zones and there are also some nodes that you can acquire to help speed up your movement around the map. These buildables can strategically be used for taking control over the map. Sadly my team and I were not able to get in control and lost this match. The PR Manager on the other team clearly knew what he was doing in this game type. So the score for the day was 1-1 but our play session wasn’t over. For the rest of the day, we alternated between Meltdown and Capture as the battle continued.

MentalMars at 2K Benelux for the Battleborn Multiplayer Preview

Of these two game types, I prefer Meltdown because it’s something different from what I have played. The main goal isn’t just to kill other players. I don’t always have the urge to be the player with the highest kill count. I like the fact that you can win by playing smart and not just by being stronger than the other hero. That you can add to the team by taking down the minions and gather shards to build structures that support your team. I noticed while playing capture was that the nodes that you can build to help you get around the map were placed a bit out of the conflict zones. As most of our battles took place around the capture zones these nodes were left unprotected in the middle of nowhere, making them a sitting duck and not very meaningful to invest your shards in. Maybe that this level of map control is something for more experienced players. But in the matches that I played, it was run to a capture zone smack the other team out of it. After capturing it go to the next zone and repeat the process. What still was a fun experience, but there is probably more to gain there with proper teamwork and map control. While playing Meltdown on the map Paradise building things felt more meaningful to do as the fights mostly take place on the two lanes. This is also where all the turrets and nodes are located and therefore feel more natural to use.

Knowing the strength and weaknesses of the characters and what role they play helps with creating a good team set up and really makes a difference in battle. Don’t pick Boldur and expect to go all Call of Duty on the other team. Each hero has its own play style and abilities and you got to learn how to use them but also how to counter those abilities. During my playtime, I noticed that everyone started trying out different heroes, but also learned that the melee characters as Rath and Phoebe were two powerhouses. Most of the players didn’t know how to counter these two and were overwhelmed by the amount of sword spamming in there face. This resulted in Rath & Phoebe being the most hated character to encounter. And on the other hand, the most liked heroes to play as everyone wanted to kick the other team’s butt. So you could frequently hear people screaming at Phoebe. But after some game time, I could hear the Phoebe players starting to call out “aaaggh who is playing Benedict?” because as a certain person was playing as him and was able to counter their play style. Those little swords were a bit on the short size for hitting a flying Hawk up the air. So find out where your strengths and weaknesses lie, so you know how to counter your opponent. And yes sometimes it’s best to run away and fight another day.

All in all, I had a great time playing the game and winning the rest of the following matches added to the enjoyment. I liked this Battleborn Multiplayer Preview Event and I’m really looking forward to the release. Even my brother who tagged along for the ride enjoyed himself. He didn’t know what he was in for when I brought him along. Now he hopes that we once again get invited by 2K so he gets his hands on the game again because he didn’t want to stop playing. Hopefully, I’ll get another chance to play a new Battleborn multiplayer preview build that contains the newly announced heroes so I can report back to you guys. Thanks