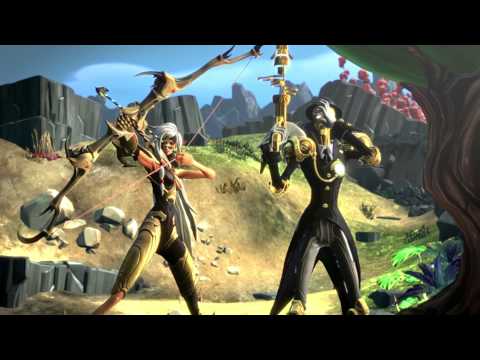 Gearbox Software announced their new franchise, Battleborn, with this stylish trailer. The trailer starts giving you the impression of a peaceful environment with a cute little bug flying around. But then things start to shift. The bug gets saved in the nick of time by Thorn, a elf from the Eldrid faction, as she runs by. Thorn is being chased by an army of minion robots. As she falls do to an explosion, the gentleman sniper Marquis comes by to help her out. Soon we discover that there is a large scale battle taking place and one after the other Battleborn hero pops up. First we see see Miko, the walking mushroom, in the background and later we see him throw his head. Next to him the space marine Oscar Mike makes his appearance. After shooting a frag  Phoebe, the female sword wielder, shows up from behind the hill and showcases her exceptional skills. After this somewhat magic show it’s time for some brute action as Montana takes aim with his big badass mini-gun (or is it a maxi-gun). As Montana shoots towards the enemies in the distance we also see a bigger Spiderbot. But as the little minion robots get close, Rath takes them out with his blades.

Battleborn just showcased a wide range of characters each with their own unique playstyle. But as the camera takes flight from the battlefield and flies into space we see one planet after the other explode.  As this epic battle takes place the different heroes fight out the end of days on one of the  last planets in a dying universe. So what do we have: