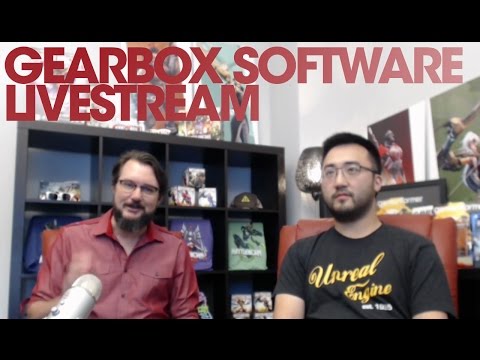 Yesterday Gearbox Software showcased some upcoming content during a live stream. With the broadcast Mode they showed off the new maps for each of the PvP modes.

Each map is build with the feedback from the community in mind. Gearbox also watched to the other maps to see what the players like in these maps. All new maps have a higher standard for unwanted collisions. This next level of detail is also being applied to the old maps and those are getting fixed.

Broadcast mode lets 2 additional players sit in a private PvP match and spectate the match. They are given a free camera and abilities to follow the players across the map. This should bring eSport shoutcasting to the next level. The broadcasters can get full insight to the players helix choices and gear they are running.

With the upcoming patch Gearbox is also adjusting the heroes. Some got slight tweaks and others have gotten a more interesting helix choice. Full patch notes will be posted but here is some of the stuff they talked about:

Ambra’s Sunspots get increased healing capabilities. She also gets a gamemechanic that increases her sunspot cooldown. By using her heat gauge during a melee attack the cooldown time on the sunspot skill gets reduced. This creates some interesting gameplay for her as he now has increased territorial  capabilities. Ambra can put down a sunspot and claim the area, melee some minions and place another sunspot to push the teams comfort zone forward.

Kelvin’s stun capabilities will be reduced, the duration of the stun as the speed of his  sublimate skill. Wall cast time reduced.

Attikus is getting more health and he can sprint while using his charge punch. Attikus has a lot of crowd control abilities. But with these knock up or push back on enemies it actually makes it harder for Attikus to deal damage to  his targets. So these crowd control abilities are getting changed. Pounce now does a higher base damage but it’s push back effect is getting replaced by the  silence status effect (~1sec). Pounce is now  bit slower and in 3rd person more. His ultimate skill,  Hedronic Eruption, now slows enemies instead of knocking them up when fully charged.

Level 2 Nades on Nades skill gets a buff as the cone in which the smaller nades will drop is reduced. Shooting a frag on target will result in a more damage than the fragcendiary grenade.

Alani has gotten several tweaks with the hotfixes. But a small tweak that might go unnoticed is that her sprint speed is getting a  increase

Rath is the top killer at the moment and he is in line with his character profile. His double jump does get some improvement. The recent change to gear with the hot fix does impact Rath as attack speed on gear is reduced.

His Health gauge will almost be double the amount. This way he can setup his pylons instead of running away after taking a hit setting up his first pylon.  Kleese’s charged shot mutation damage was toned down.

Miko could easily escape a fight when getting damaged. The LVL 7 Left Helix skill that increased movement speed is being reduced. The movement speed buff goes from +30% to +15% and now has a 1.5 second cooldown. This way Miko can’t run fast all the time when getting hit.

The LVL 3 slug rounds skill is getting replaced. This skill was very powerful and made Ghalt a sniper. This didn’t fit the hero’s profile and what you expect from a shotgun. The new LVL3 skill will increase Ghalt’s shield capacity & shield recharge rate. This makes it possible to spec him more into a tank.

Mellka’s venom time got reduced from 8 seconds to 4 seconds. It was a n annoying long time for the status effect to last. That’s why it got reduced in half, but it also got a damage increase. So you just die faster when hit by the venom.

The push back effect on Reyna’s ultimate skill has been increased.

Toby’s ultimate skill has been increased and his triple shot has gotten a boost to 25%.

The fast off-hand melee strikes that allowed you to juggle an enemy in the corner now loses its pushback effect after 3 strikes..

Would is a “new” crowed control status effect indicated by red medical crosses that move downwards. This reduces the amount of healing on the  affected hero. It’s a counter to teams that double up on healers during a match. They where able to patch up injured heroes with ease. ~60% healing reduction from the wound affects healing received, health regeneration & life steal. Basic attacks have a short duration while skill attacks have a longer (2 – 4 second) duration. This status effect was first a Galilea exclusive and it was one of the things that made her stand out. The team at Gearbox noticed that they got something special here and saw greater potential here to balance the game. The following heroes are getting this  crowed control status effect to their arsenal: