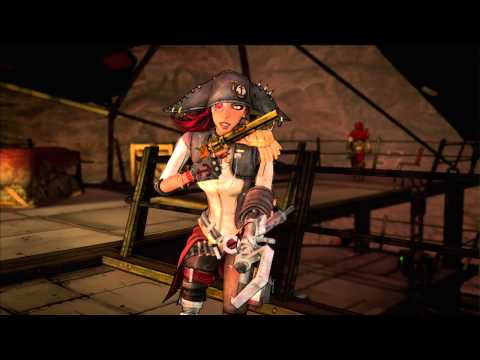 The first campaign add-on for Borderlands 2 is called Captain Scarlett and her Pirate’s Booty.

Legends speak of Captain Blade’s Lost Treasure of the Sands, of a prize so great that men would turn the sands red in pursuit of it; of a pirate queen, courageous and deadly, who would stop at nothing to find it; of a monstrous Leviathan; of the Vault Hunters who journeyed to the desert town of Oasis, not knowing the horrors that would befall them.

This is a pirate-themed DLC that takes you to a place called Oasis and if that name sounds familiar to you, well, that’s true because you drove past its sign multiple times throughout the game.

This is the first campaign add-on which is also part of the season pass and it gives you a new story to play through. Captain Scarlett and her Pirate’s Booty is giving you all the things you know and love about the pirate theme, backstabbing your partners, hidden treasure and X marks the spot.

With new missions & enemies, the game will challenge you in new ways, and don’t forget about the reward, because what is more important than new loot, AWESOME LOOT!

Yes, you got your new toy, the Sandskiff, a vehicle that floods over the dry sand landscape, but we want new guns, AWESOME GUNS! Well, you have to fight for it, because after Terramorphous the invincible Gearbox Software adds 2 new Raid Bosses.

The two new invincible bosses will give you a new type of currency called Seraph Crystals. Only these new raid bosses will drop them after defeating them. With these crystals, you are able to buy new gear rarity at a special black market.