More Info
Home » News » Borderlands 2 – Come and Get Me Trailer 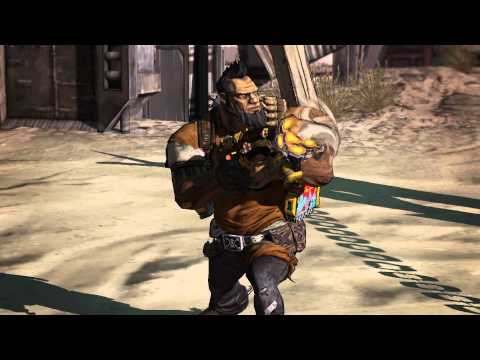 Handsome Jack, the so-called Hero as he likes to name himself is smack talking to you in this trailer. The Hyperion CEO who is the main enemy in Borderlands 2 is challenging you to stop him and his droid army.

As Handsome Jack is talking to you, you see him standing in the Hyperion city ‘Opportunity’  where more and more types of Loader bots stand next to him in battle.

As Jack talks about the new vault hunters we see once again Axton‘s turret in action. The first time shooting Slagg, a new element that makes enemies more vulnerable to other elemental types. Later we see the turret exploding when dropped into action and even further down the video we see it having a bubble shield.

Salvador is able to flip off the enemies and attract argo from them, making him the main focal point.

We see Maya‘s Phaselock release a fire nova when locking a Hyperion Loader and later on in the trailer we see her having fire wings.

Zero turns invisible and by doing so he lights up all enemies and makes them stand out and blueish.

Did you notice Handsome Jack has two different color eyes?