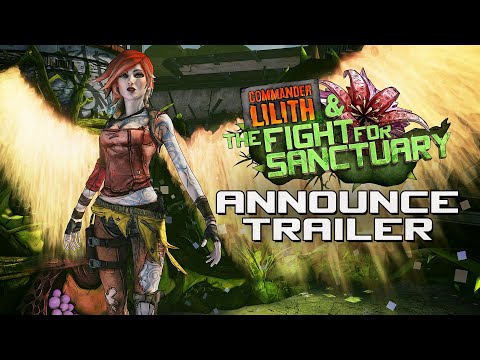 Hey Vault Hunters! Kicking off E3 with a huge surprise, 2K Games, Gearbox Software, and Gearbox Studio Québec announced a brand new DLC for Borderlands 2. Commander Lilith & The Fight for Sanctuary is now available on Xbox One, PlayStation 4, and Steam.

This DLC brings you back to the wilds of Pandora for a brand new adventure that sets the stage for Borderlands 3. If you own Borderlands 2 or Borderlands: The Handsome Collection then this DLC will be free. However, you do need to download it before July 8 at 11:59:59pm PDT. Because after that it will become a paid DLC ($14.99 USD). So what are you waiting for?

If you don’t own Borderlands 2 or the Handsome Collection, then you are in luck, because they are up for grabs on all platforms. On PS4, it’s one of the free PlayStation Plus games of the month.  On Xbox One, it comes with the Gamepass collection, or pick it up with an 85% discount.  On PC, there is a 97% discount going on steam.

Commander Lilith & the Fight for Sanctuary takes place shortly after the events of the main story in Borderlands 2. Sanctuary is under siege, the Vault Map has been stolen, and toxic gas is poisoning Pandora.

Join up with Lilith and the Crimson Raiders to take on a deranged villain hell-bent on claiming the Vault Map for himself.