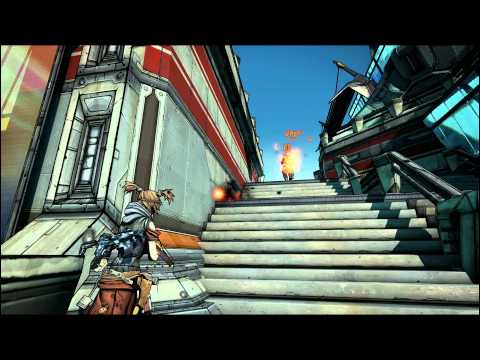 The Birth of a DLC Character

Downloadable Content was one of the things Gearbox Software wanted to streamline with Borderlands 2. Because with the original Borderlands these expansions were a bit of an afterthought.

During the production of those DLCs, they learned that the systems of the game weren’t ideal for adding extra content to the game.

One of the limitations was that you could only add one Fast Travel Station to a map, this resulted in the fact that we had to walk really long distances to get somewhere.

With these lessons learned from the first game, the developers were determined to make sure that wouldn’t happen again. This led them to develop new systems that were more modular and not restricted by those limitations.

One of the new features was the ability to add new playable characters to the game. However, once that limitation was overcome, it also inspired the developers to design one.

With the whole Gunzerker type of naming the Vault Hunters a new name surfaced, the Mechromancer. It was a twist on one of the popular RPG classes, the Necromancer, and a deathly mech robot.

One of the concept artists picked up on the idea and started drawing this huge bot called D347-TP (Deathtrap) and before they knew it this little idea became a thing.

Gearbox Software was under pressure of getting Borderlands 2 out the door and therefore, there wasn’t enough time to fully develop the Mechromancer in time before the game shipped.

This is how Gaige became the first playable DLC character. Also, this spicy little girl is the first Vault Hunter to have the shock element as part of a skill tree.

Gaige was built with the mindset for players that have a co-op buddy or partner that isn’t that good with first-person shooter games. Therefore, the developers added skills like “Close Enough” to Gaige’s skill tree.

The skill “Close Enough” gives bullets the chance to ricochet off the wall and towards an enemy.

However, Gaige isn’t just for less experienced players. Gearbox Software also gave Gaige something for the veteran players as they added a new stacking mechanic. With this new stacking mechanic, skills will perform better when triggering a certain event. You can then stack the performance multiple times if you keep triggering the effect.

Everyone who pre-ordered Borderlands 2 will get Gaige the Mechromancer for FREE, as part of the Premier Club. This is a very AWESOME move by Gearbox Software and 2K Games!