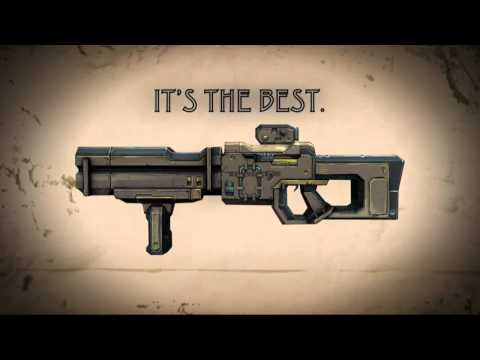 This Tediore Weapons Trailer is a commercial type of video showing the cheap feel and design of the Tediore Manufacture.

Tediore guns are cheap throwaway weaponry and because you actually throw them away when you reload a new weapon will respawn in your hands. Although they want to come off as cheap that’s some high-tech technology behind that move.

Borderlands 2 developer Gearbox Software’s first idea was that because the guns were so cheap that they could explode in your hands, this idea was removed from the game because it wasn’t that fun playing the game.

Another feature of this weapon manufacture is that as you throw away the gun it explodes on impact, by reloading before you empty your clip will result in a bigger blast and deal more damage.

Tediore was founded on the principle that no family should be without the protection that an affordable, lightweight firearm provides. Whether you’re planning on taking little Billy out to the fields for his first pheasant hunt or you need to chase some trouble off your front porch, Tediore will be there for you.

Over the years, Tediore has built a reputation among the working class men and women of this land for providing fast-reloading weapons that anyone, on any budget, can afford.

So the next time you’re headed down to the Save-N-Save, why not put a little piece (sic) of mind in the cart and grab yourself a Tediore? Tediore’s pistols, shotguns, sub-machine guns and rifles can be found at major retailers nationwide.