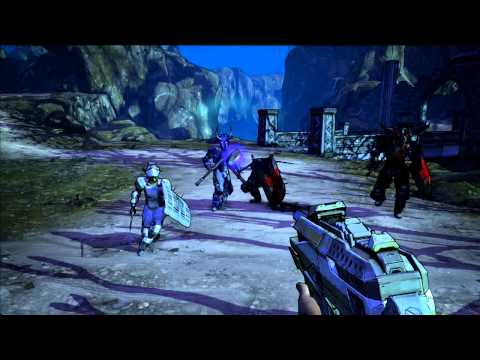 The fourth campaign add-on for Borderlands 2 is called Tiny Tina’s Assault on Dragon Keep. This is the final DLC that is part of the season pass.

This Tiny Tina DLC took a bit longer to make but steps up the quality one more time. Gearbox Software is known for its quality downloadable content, but with this new expansion, they go out with a BANG!

Tiny Tina’s Assault on Dragon Keep takes place in a fantasy setting made up by Tiny Tina herself, after the story of the main game the Vault Hunters are playing a game of Bunkers and Badasses, a Dungeon & Dragons type of game.

You play as one of the board pieces and encounter crazy situations where Tiny Tina needs to make up new stuff because you made a move that wasn’t in her quest line. The game even breaks the fourth wall by letting the storytellers into the game and changing things up.

Tiny Tina’s Assault on Dragon Keep is everything you would expect from a fantasy type of setting, orcs, dwarfs, fairies, dragons, wizards, and more.

Not only bringing a unique setting, but this DLC also brings what the fans have been asking for. There is more variety, legendaries and all the characters they come to love.

Not only do the NPCs get a twist also some of the game mechanics are getting a new twist. Normally you would throw grenades and as the counter reaches zero you need to stack up on some new ones, with this fantasy setting your frags can be replaced by magic spells. Not only will your character call out the spell they cast, but your mana will regenerate over time and you will be able to cast some more magic.

Tiny Tina’s Assault on Dragon Keep adds new interactions to the borderlands franchise. As the story progresses the playable Vault Hunters will each react in their own way to certain situations, commenting on the things along the way.

Another new game mechanic is new ways to use your Eridium, some loot chests will come with a pair of dice, for a few Eridium you are able to boost the outcome for your loot.

Tiny Tina gets her own Lootsplosion slot machine, and little power-ups make their way into the game. If you are familiar with the General Knoxx DLC from the first Borderlands there was a mission where enemies would drop temporary power-ups, an item that would buff a specific status, move faster, do more damage, take less damage, etc. Well, these make their return into Borderlands 2 Tiny Tina’s Assault on Dragon Keep.