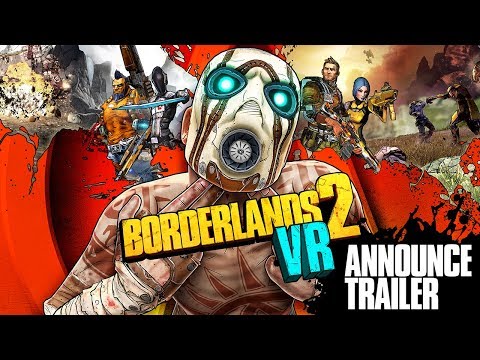 On the PlayStation blog, Sony announced that they partnered up with several studios to bring some awesome games to their PS VR experience. One of those hot new titles is Borderlands 2 VR by Gearbox Software and 2K Games.

What to expect from Borderlands 2 VR

Personally, I think it is great that they are bringing this game into a VR experience. I know that some of the other content creators are looking forward to this. However, before you jump on your dream cloud I want to tell you 2 noteworthy details about what you can expect from Borderlands 2 VR.

First off, Borderlands 2 VR is a single-player game. While the original was all about co-op gaming with your buddies, well this time around you are the hero. That said I do see this change as a VR optimization which I’ll talk about later. Personally, I don’t mind because I already played the previous Borderlands games as a solo experience.

This leaves us with the vanilla game that is optimized for VR and 87 Bazillion other awesome things.

As I mentioned above, Borderlands 2 VR is a single-player game this time around. Bringing a game to VR also comes along with some difficult design challenges. One of them is motion sickness. How do you move around the world?

If you look in the announcement trailer you can spot a short clip that shows teleportation. You as the player can teleport small distances while staying stationary. This reduces the amount of motion sickness that some people experience.

The fun thing I think Gearbox did to counter this limited movement system is incorporate it into the gameplay. Because you are not able to quickly strafe and dodge bullets, they instead gave you another additional power. This is where the bullet-time effect comes in.

This so-called” BAMF Time” (or “BadAss Mega Fun Time”) lets you slow down time and gain a bit of an advantage there. Slowing everything down makes this immersive experience more controllable and less overwhelming. Not everyone is custom to the VR experience and FPS games can be tense, especially if you got a rabbit skag coming at you (i really hate those).

With BAMF Time you are able to slow down time and still perform all of your other abilities. It basically becomes your second action skill. The cool thing is that the developers also included some upgrades into the skill tree. So Zer0’s “Death Mark,” which marks targets for additional damage, now also restores two seconds of BAMF Time per marked kill.

Another skill tree overhaul is due to the fact that Borderlands 2 VR is a single-player experience, therefore all those team skills are replaced with new ones. For example, Maya’s “Res” ability, which now is called “Empathy” – causes Phaselock to deplete half your current health, damaging enemies based on how much health you lost, and doubling healing during BAMF Time.

These new gameplay mechanics make me excited to give the game another spin as there are new ways to play an awesome game. The whole driving in first person will be an experience on its own as you can drive forward while looking and shooting in another direction.

I know Salvador is already a popular character in Borderlands 2 and I think that Gunzerking in VR with 2 of those move pointers will add to that. I got a feeling that it will be satisfying to aim 2 guns and mow everything down.

In the Borderlands 2 VR trailer, there are a few brief moments where you can see that Salvador is wearing a special device on his arm (this device can be seen in the screenshot in the gallery above). At first, I thought this thing would allow you to use the BAMF-Time.

As it isn’t present in all of the shots I assumed it was something you needed to collect throughout the game. Another theory was that it might be cool if all the class mods are now shown on your arms. However, this would mean that all the class mods needed to be redesigned into some kind of bracelet.

Actually, it is none of that. It’s essentially a fun new visual design element Gearbox decided to add in. This allows them to explain to the players that they now have the option to teleport to move in Borderlands 2 VR.

It’s a new ECHO device called MOVER (Mobile Operations and Violence Enhancement Rig). This new Virtual ECHO comes with a teleportation device and will also help players know where the buttons are located on their controllers.

Borderlands 2 VR is currently only announced for PlayStation VR, however, in the latest promotional trailers you can see a disclaimer informing you that Borderlands 2 VR is only exclusive to the platform for a minimum of 5 months.

As you could read above, some of the co-op-focused skills have been adjusted, since there is no longer a co-op function. These are not the only changes to the game. Any encounter or mission that required multiple players is tweaked so they can be completed by you. Think about the raid bosses, Terramorphous and Vermivirous that required you to team up with 3 other players.