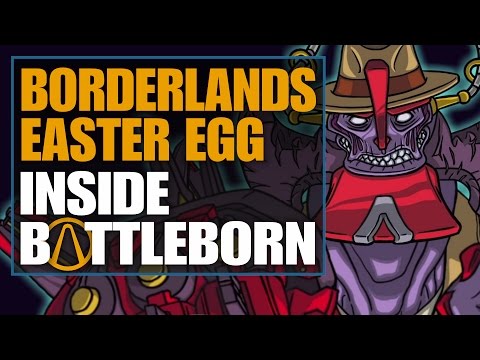 We are hunting down Borderlands 3 easter eggs in the new Battleborn Story Operation and a hidden secret has been found inside Attikus and the Thrall Rebellion.

Inside the first story dlc of Battleborn the level designers are giving the player the impression that the level you are in is part of a bigger city. They do this by creating areas that are visible but cannot be accessed. By closing of streets with a gate you can see past the gates, but you can’t physically go there. It’s a good illusion that tricks the player that they are actually in a real environment. The days of  relying on the good old invisible walls that prevent leaving area’s and seeing empty spaces are in the past. While some player like to get a  peek at some unique set pieces others will dismiss them as they don’t serve a purpose from them in order to progress through the game. This gives developers the opportunity to sneak in some secrets  for the player to find. This is also the case with Battleborn’s first story Operation; Attikus and the Thrall Rebellion.

Behind one of the gates, there is some graffiti placed on the wall. While the Jennerit themed maps often  have some graffiti in them this location has a special piece of art.  As most graffiti is just some weird gibberish this piece still gives that impression but it actually has real letters. The obvious  clue to Borderlands is the vault icon which is the symbol for that franchise. If we try to read the letters and try to make a word from it, it seems like we are one letter short. But if we turn the Vault icon into the letter A, from which the symbol borrows it’s shape, we get our self the name  Promethea.

Promethea is a planet in the galaxy where the Atlas corporation found alien technology and reverse-engineered it in order to manufacture improved starships and weaponry with the benefits of this new technology. The Crimson Lance also have a military presence on the planet, with General Knoxx stating that Roland served “two tours” on the planet.

Living conditions are presumably harsh, or at least worse than the already difficult life for Pandoran settlers, as an Atlas propaganda message at T-Bone Junction (when referring to the positive side of Pandora) states “…at least you’re not on Promethea!” Citizens of Sanctuary occasionally comment to the same effect.