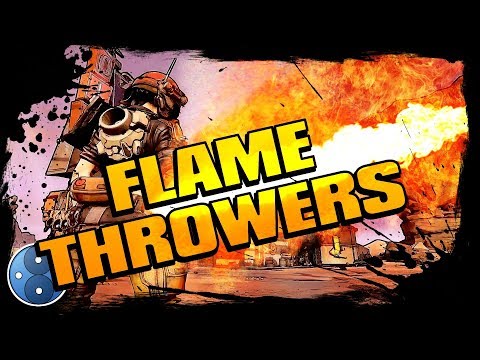 Judging by the Borderlands 3 announcement trailer we are getting flamethrowers in the game.

In this article, I’m going over the recent Twitter exchange between Gearbox president Randy Pitchford and business magnate Elon Musk. This quickly went from Elon having fun with Flamethrowers and Randy being super serious about adding them to the next Borderlands game. Basically confirming flamethrowers coming to Borderlands 3. So what does this mean for Borderlands 3 and the weapon manufacturers in the game?

Flamethrowers are a bad idea unless you like FUN!

So Elon Musk who is a genius decided to make flamethrowers because they are fun. And they are selling like hot cookies as the 19.000  are almost sold out. But Elon has been posting some funny tweets about his flamethrower. Like they are great against the zombie apocalypse. That Flamethrowers are a bad idea and you shouldn’t buy one unless you like fun. But the tweet that triggered Randy Pitchford was the one that the flamethrower is sentient and its safe word is “cryptocurrency”, it comes with a free blockchain. Randy Pitchford responded that he was going to add this to the next Borderlands game and asked Elon if he wanted to write the flavor text.

Personally, I always wanted one and even with Battleborn, I hoped that they would add a hero that would have a flamethrower. That sadly didn’t happen, but with Borderlands 3 we potentially can have thousands of variations. Hopefully, it isn’t just the one Elon Musk flamethrower with no range because that would just be a troll weapon. Hey, it’s still Gearbox Software we are talking about, it wouldn’t be the first time they troll us. Maybe it’s just like the Flakker where some people can wreck everything with it and other people can’t even hurt a fly.

So what could this potentially mean for the weapon manufacturers? Will they all be making flamethrowers or will we be getting a new weapon manufacturer that specializes in flamethrowers just like Torgue is all about the explosion? Torgue basically got dips on the explosive element since Borderlands 2 not counting frags and rocket launchers. Therefore it could be possible that we will get a weapon manufacturer that focuses on the fire element with flamethrowers. Because wondering how adding a flamethrower would work with all the weapon parts. It should at least have a unique barrel and clip for such a thing to work. Add up that you would also need to make it compatible with all the other manufacturers. So a new weapon manufacturer wouldn’t be such a bad idea.   With previous Borderlands games, Gearbox pulled a lot of names and references from Greek mythology. When I started researching Fire and Greek history I found out that ‘Greek Fire‘ was a thing back in 673  and it dominated naval warfare. This liquid fire is the precursor of flamethrowers and napalm. This invention of Greek Fire is credited to a Christian Greek named Kallinikos (aka Callinicus). So it would be fitting for Gearbox to name the new weapon manufacturer after the guy.

Let me know what you think of flamethrowers in Borderlands 3 in the comments below.   Also if you have any specific questions about the next Borderlands game then check out the Borderlands 3 FAQ for a quick overview and links to in-depth articles on the most frequently asked Borderlands 3 questions.