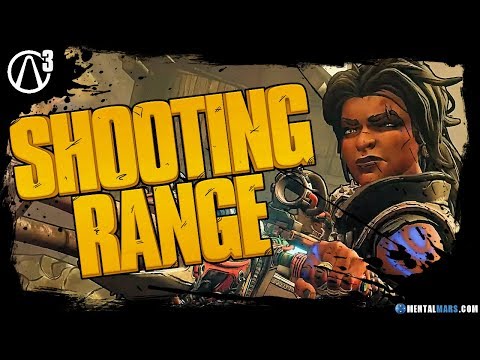 On social media, the borderlands channels posted a video clip of weapon 370,143,121 a Hyperion SMG. The Synergized Powerplay comes with its own shield that reflects bullets. It’s super cool that Gearbox Software added new gimmicks to the weapon manufacturers. If you haven’t seen any Borderlands 3 gameplay footage then this is cool, and secondly, you have been sleeping under a rock.

There are over 1 BILLION guns in #Borderlands3. Let's list them all! Like other Hyperion weapons the Synergized Powerplay gets more accurate the longer you fire. pic.twitter.com/zggJM5BL0q

The more interesting thing to this social media post is the location it’s taking place. It seems that we are getting a shooting range with moving targets. This is great since it gives a way better impression of the weapon you are using. Previously we did have a shooting range at Marcus munitions, however, this test dummy stood still and was only useful for checking the damage numbers. Now that you have moving targets, things like weapon handling and reload speed matter more.

During the Borderlands 3 Gameplay Reveal Stream, They did mention a shooting range on Sanctuary III, however, they didn’t show it off. Could this be the one that we will find behind Marcus Munitions this time?

If you look at the right side of the shooting range, you can see a scoreboard that registers the number of targets that you have hit. On the left side, you can also see a timer that counts down. This suggests to me that this could mean that we will be getting certain challenges. Manage to hit all the targets in the set time in order to unlock a little something-something.

This shooting range looks to be one were you keep stationary as the player is standing in front of a guardrail. It would be interesting if we would see an obstacle course of some kind. While Borderlands has never been a game that tests your fast gunplay, the gameplay in Borderlands 3 has been modernized. There is a lot more fast-paced action possible this time around. Back in the day when I still played Call of Duty, I did run ‘the pit’ and at first, you only do it so you can get the achievement. However, then you go and see if you can get a better score than your friends. I don’t know if Borderlands 3 will have such a thing but all-in-all it’s a fun challenge.

The Borderlands community requested test dummies for Borderlands 3 and Gearbox Software announced that they will be adding them to the shooting range. So more on that soonish…