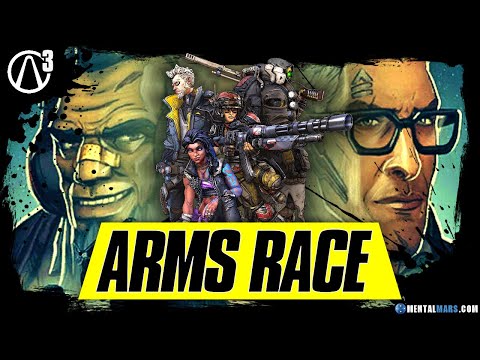 Borderlands 3: What is Arms Race?

Arms Race is the new stand-alone game mode that is part of the Designer’s Cut. This 5th DLC package is part of season pass 2 but can also be purchased individually. It contains Arms Race and an additional skill tree for each of the Vault Hunters. The Designer’s Cut is going to be released on November 10th, 2020.

What is Arms Race?

Arms Race will bring you to the blisteringly cold region of Pandora. At the Stormblind Complex, you can participate in a game show hosted by no other than Axton and Salvador. These are 2 fan-favorite Vault Hunters from Borderlands 2.

Axton and Salvador have been mentioned occasionally throughout the game and its DLCs but It’s great to “see” these 2 back in the game. Well, you won’t be meeting them in person as they are the commentators for this game show.

Arms Race is a stand-alone game mode where you get to show off your skills. You could see it as a Battle Royale-like game mode without the PvP elements of such a game mode. So you won’t be fighting against other players, on the contrary, you can actually team up with your friends.

You will be stripped from your gear and action skills and will be dropped fresh into an arena. There you quickly need to gather your gear and survive the horrors Arm Race throws at you. Luckily, the game will always drop you near a starting chest. That way you always have some gear at your disposal.

Your goal is to fight your way through the map and loot the red chests marked on the map. However, these locations are well protected and your time is limited. Because like any Battle Royale-like game the area in which you can move around will shrink. This forces you to the center of the map. There you must enter the bunker and face off against the boss.

Ahead of the reveal, Gearbox Developers mentioned that they wanted loot to matter in this game mode. In Arms Race, you do need all the loot you can find. Because you won’t have access to all your gear from the main game. So Bye Bye; Face-Puncher, Hellwalker, or OPQ System.

You can carry a lot of items in Arms Race so be sure to pick up everything.

Arms Race also adds new legendary items to the game. However, in order to keep those, you will need to extract them. Since Arms Race is like a 1-life challenge run with a fresh start each time, you need to deposit the items that you like to keep in a special beacon. Only this way you can keep the items you like. You can find a few of these beacons throughout the map but also one after defeating the final boss. If you die and didn’t send the item to your bank, it will be lost forever.

While you can find new legendary items during Arms Race, you can only use them outside of the game mode as they will be locked. If you are lucky you can stumble upon a ‘World Drop’ legendary during this game mode. They have really helped me out throughout my games.

While Legendaries can drop like crazy in the main game, from my experience this isn’t the case in Arms Race. Legendary items can still drop from any loot source. I have gotten some from trash piles and basic lockers.

Personally, I had a lot of fun with Arms Race. I did have to adjust my playstyle as I tend to take my time and compare the stats of all the weapons. As I have exclusively been using legendary weapons, I needed to rediscover the other weapon rarities again. However, since your time is limited I had to speed up my decision-making and just run with it. Which in itself let me rediscover the weapons in the game.

You really want to go for those points of interest as taking on that Spiderant Queen isn’t always worth your time. The chance that you get a powerful item isn’t significant and therefore you can better keep moving. Because as mentioned before, you don’t have all the time in the world, as the storm will consume the map and you can’t survive in it.

I kinda missed my action skill as this is a character- and game-defining feature in the Borderlands franchise. But the Devs mentioned they wanted guns to be meaningful. Since I mostly play Zane with a lot of speed boosts, Arms Race felt a bit slow as you won’t have access to those skills. Getting a snowdrift artifact during your run is awesome as it allows you to quickly travel through the map.

Arms Race is an exciting game mode because you only have 1-life and you can lose your gear when you die. This really raises the lava, I mean the ‘stakes’ as you don’t want to lose that new legendary item. Planning your route is important because you might just want to send home an item before taking on the final boss. While I managed to defeat the boss each time, there were some really close calls.

How to get Arms Race

If you are excited to jump into Arms Race and also get those new Skill Trees, you can get DLC5 on Consoles, Steam, or EPIC using these links. If you purchase the content using this link, you also support me and the website. I would really appreciate it if you do that as it helps grow the site.