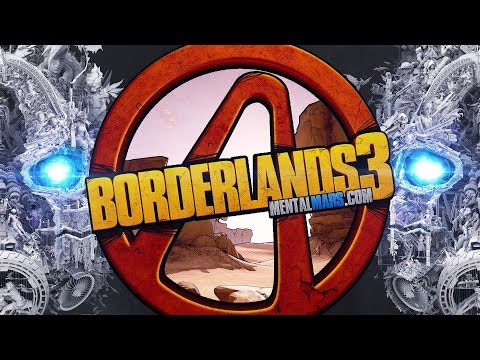 Gearbox Software and 2K Games drop a massive teaser trailer for Borderlands 3 today!!! In this stylish trailer, we multiple new as returning characters pass by.

There are 3 hidden codes throughout the trailer.

There are several codes hidden throughout the trailer. If you combine them they make up a Borderlands 2 SHiFT Code. The code unlocks the community day skin for Salvador and provides 5 Golden Keys: C35TB – WS6ST – TXBRK – TTTJT – JJH6H

There is a morse code at the beginning that tells us; “Count the Sirens”. As you may know, there can only be 6 Sirens at the same time in the Borderlands universe. Commandant Steele in Borderlands 1 died, and so did Angel in Borderlands 2. That leaves us with Lilith, Maya, and probably the new playable character. There are rumors/leaks that talk about another one but I’ll leave that out in case you don’t want to be spoiled. Also, the Borderlands 3 easter eggs in Battleborn could suggest that Tannis could be a Siren, as the easter egg mentioned; Tannis is not what she seems to be. Because Tannis’ clothing has always been covering her skin we haven’t been able to see her tattoos if she has any.

Then we have the question; are Sirens born or are their powers transferred when one dies?

There can also be seen some Braille which tells us; “Follow and Obey”. When I hear this I personally think this could be the motto of the Borderlands 3 villains. In the teaser trailer itself, you can see they have a mass following.

In the beginning, we imminently see the two antagonists. They have this upside down Vault symbol. She seems more powerful than the other, she is also sporting angel wings like the other sirens. He has a mechanical arm. When the camera pans out you can see that they are gathering followers. The “Follow and Obey” does seem to apply here.

After the close up of the two antagonists we flyby the four main heroes. They look Badass as they are on top of a new bandit technical. The side blades on this vehicle will be great for slicing multiple enemies as you drive by.

It looks like a lot of characters from the past Borderlands games make their return to Borderlands 3.

When see Lilith pass by and she has her wings behind her. Something noteworthy is that she is in the center of the final shot. Does everything that’s going to happen centers around her? A bit lower we see claptrap so it might mean nothing.

Ellie from Borderlands 2 is also returning. She seems to be wearing scooters cap in the trailer. In the final image, we can see her with a mechanical arm and a prototype space ship in her other hand. A similar ship can also be seen in the background of the trailer when we get introduced to the playable characters.

Both Sir and Lady Hammerlock make an appearance in the trailer. Aurelia’s look seems to be a bit different this time around.

Tales from the Borderlands sidekick Vaughn also makes a dashing appearance. I’m just gonna say this is a Derch – No Pants Gaming reference.

You can see Brick, Mordecai, and Tiny Tina high five each other. Mordecai seems to sport a similar outfit at the previous game. Brick has a nice bandana and on the not so nice things to spot, he is wearing a 3rd dog paw on his neckless, so he lost another puppy. Tiny Tina has aged a bit, I don’t want to say grown up as she is wearing bunny ears. Other clues that give away that this is Tiny Tina are the two fluffy bunnies. One on her belt and the other one on her shoulder pad.

In the final image, we can see Zero and Maya off to the right. Zero being the assassin that he is, making a cool strike with his blade. Maya is wearing a hooded cape. Her hair also has grown, I can’t see if this is just on one side, this look does give me a fairytale impression.

Just next to Zero and Maya, you can spot Rhys standing above a big ATLAS sign. He is still sporting a hexagram blouse but has grown a mustache.

Both Tannis and Marcus can be spotted in the final image. The easter eggs mentioned Tannis so it was expected to see her return. Marcus will probably be tied to the gun shops again.

Moxxi is a fan favorite since she was introduced in Borderlands 1. In every Borderlands game she has an established bar. It’s no surprise that Moxxi and her bar make a return. It looks like her bar does have a Crowsnest, so is it located near a lake or something or is it just made out of old material. Hey, maybe we get a pirate-themed Moxxi this time (Enasni, will you make a pirate-themed Moxxi?).

At the beginning of the trailer, we do quickly see the broken mask of Handsome Jack. What his role will be in the game is unknown, maybe it’s just a sign that he is something of the past and his reign has fallen, descriptive as his broken mask.

I got a bunch of images up on my twitter, while you are down there consider following me.