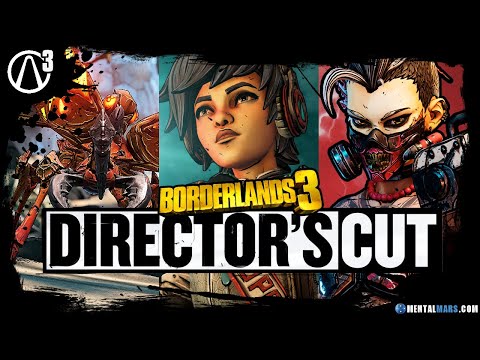 The Director’s Cut Out Now

After a short delay, we can finally jump into DLC 6. I’m personally looking forward to this new content as there is a bunch of stuff to do.

We finally got a Raid Boss. Hemovorous the Invincible has been teased multiple times but now it is actually here. I’m up for the challenge but I’m also curious to see if I can beat it because it won’t be the first Borderlands Raid Boss I’m not able to beat.

Ava’s Murder Mystery Missions is actually something I’m looking forward to. I know Ava isn’t the most liked character in the game, although the behind-the-scenes footage of her changed a lot of folks’ minds as they questioned Gearbox why they cut that cinematic. Hopefully, this is the beginning of Ava’s redemption story but I’m looking forward to new side missions that will take me to new places.

The Vault Cards add challenges and rewards to the game. You get relative simple daily challenges and a bigger weekly challenge. When you complete these you will earn XP and level up your Vault Card. This lets you unlock cosmetics, emotes, room decorations, and legendary weapons. Also, who doesn’t want one of those Diamond Keys for the Armory?

The Director’s Cut comes with 3 vault cards, the first is called fallen heroes, and it’s pure fan service as it pays homage to beloved Borderlands characters that sadly passed away. While the 1st Vault Card is available at launch the other 2 will become available down the road.

The Behind the Scenes content is going to be interesting. I would love to see how things are made. Back in the day, I always purchased the DVDs/Blu-Rays with bonus content of the movies I really liked. The thought process and the amount of work they go through to make things are amazing. We already got a sneak preview of some of the Borderlands 3 Behind the Scenes content. A sound that you think is pretty basic turns out to be a well-crafted composition.

Alongside the release of The Director’s Cut, Gearbox Software is also releasing a big patch update. Of course, this fixes a bunch of things and balances a few things here and there. But they are also adding new vending machines to the base game. So if you haven’t purchased the Director’s Cut you still enjoy these. Crazy Earl will let you reroll anoints and Maurice is hiding a Black Market Vending Machine.