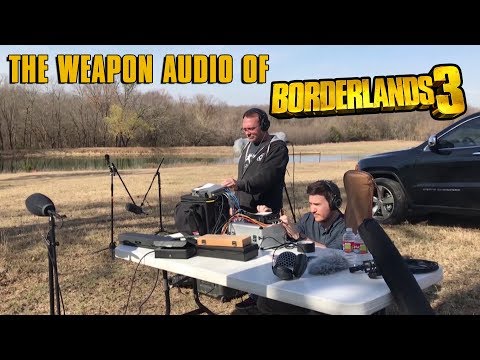 Take a look at how the audio team at Gearbox created the unique weapon sounds for Borderlands 3.

Joshua did explain a bit about how they got to the already insane amount of weapon sounds. With Borderlands 2 the sound design team made custom sounds for each of the weapon manufacturers and their gun types. By layering various sound elements on top of each other they created unique sounds for the game. Now with Borderlands 3, the team is going for a modular approach and is breaking it down to sound elements.

If you are familiar with the loot system in the Borderlands games, you know that guns are broken down into various parts. A Body, a grip, a sight, a barrel, and so on. Each weapon part has its own stats and abilities that impact the outcome of the gun. In the previous Borderlands games, these stats impacted the damage output, accuracy, fire rate, and reload speed. With Borderlands 3 these parts now also impact the sound of the weapon. Each part contains a layer of the gun sound. For example, the magazine can determine the type of gun sound because of the ammo, the body could impact the power of the sound due to the force it provides, and the barrel could affect the reverb.

Now when the game assembles the various parts to generate a weapon it will not only feel different but also sound different. Dahl weaponry might have a  hard metallic clicking sound, while Hyperion weapons sound more smooth. Maliwan guns will probably have a sci-fi zooming sound and Vladof rifles a grinding sound.  The fire rate could be used as an offset on how quickly each element is mixed together.

The game is doing the sound design out of a huge audio library and is mixing it in real-time instead of using pre-made weapon sounds. So instead of saying Borderlands 3 has 25 times the amount of gun sounds compared to Borderlands 2, it is looking more towards every gun having its own unique sound. This will add another layer on top of the weapon system to make the guns feel more unique.

I wonder how this works with the guns that verbally abuse your enemies. Will they get a different dialogue based on the weapons parts?

If you want to hear more about sound design, check out how Gearbox created the sounds in Borderlands 2.