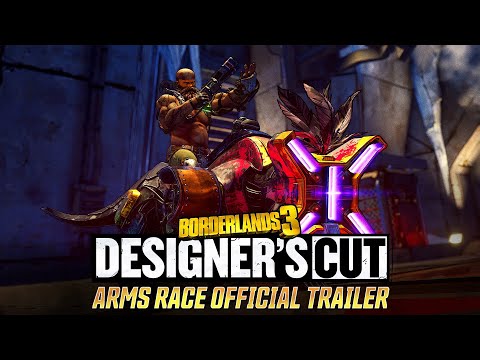 The new stand-alone game mode for Borderlands 3 got revealed during episode 8 of the Borderlands Show. Arms Race is a rogue-like experience with gameplay mechanics you recognize from other Battle Royale games. It’s not a Battle Royale game mode, so you won’t be fighting against other players. Arms Race will drop you and your buddies on a map filled with enemies just like the base game. However, because this is a separate experience, you will be stripped from your gear, skill tree, and guardian rank! Don’t worry, your gear is saved, you just won’t be able to access it in this mode.

Arms Race is a game show hosted by Axton and Salvador. They are 2 fan-favorite characters from Borderlands 2 and will provide commentary during this 20 to 25-minute event.

The idea for Arms Race arose just before GBX started working from home due to COVID-19. The Devs wanted to bring new experiences to the game and took these Roguelite and Battle Royale as an inspiration and translated them to Borderlands 3. They wanted to make the combat and gear matter.

How to Play Arms Race

You will be dropped into the map, there you will always find a white chest so you got some common starting gear as you start out with nothing. Now it’s your goal to collect better loot and stay alive. There will be random Red Chests and Air Drops along the way. However, beware as you explore the map as a Murdercane is closing in on you and forces you towards the center of the map. There you will have to fight a boss. Throughout the map and after you defeated the boss, you can find these Dahl extractors. These let you send loot to your bank in the main game. So if you find badass gear in this stand-alone mode, you are able to extract it and use it outside of Arms Race.

Arms Race is part of the Designer’s Cut. This 5th DLC package contains a new action skill and skill tree for each of the Vault Hunters and this new stand-alone game mode. The Designer’s Cut will be released on November 10th, 2020, and is part of Season Pass 2.

The Bordercast had the honor to show the first full playthrough of Arms Race. It looks like they had a lot of fun playing this new stand-alone game mode.