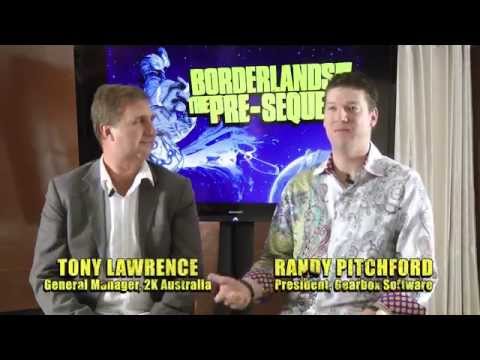 From out of the blue Randy Pitchford, president of Gearbox Software and Tony Lawrence, general manager of 2K Australia announce the next installment of the Borderlands franchise; Borderlands the Pre-Sequel.

I didn’t expect this and it’s awesome!

This new game in the series will take place between the events of the Original Borderlands and Borderlands 2, making it a sequel and a prequel at the same time, there for the name Pre-Sequel.

It’s being developed by 2K Australia, the studio was formerly known as Irrational Games, Australia, and they are responsible for the great Bioshock series.

Handsome Jack Is Back

Within this chapter in the Borderlands franchise, you will follow Handsome Jack before he is the CEO of the Hyperion Corporation and is still known as just Jack. As you play as one of the new Vault Hunters you will follow Jack on his journey and rise to power.

In Borderlands 2 Handsome Jack always refers to himself as being the hero, with this video game we will find out why he thinks that if you need a small reminder look at the Borderlands 2 Launch Trailer.

Once again we got some new playable characters but this time we kinda already know who they are. First off Wilhelm the Enforcer, we know him as the first boss in Borderlands 2, the one who almost crushed the original vault hunters from the first game.

The second playable character is Nisha the Lawbringer, who also is from Borderlands 2, she is the sheriff of Lynchwood and the girlfriend of Handsome Jack. What romance will The Pre-Sequel bring?

Next up is Athena the Gladiator,  veteran players will know her from the General Knoxx DLC from the original Borderlands. She was part of an assassin group and gave you missions.

The last Vault Hunter is nobody else than Claptrap the Fragtrap, the very first NPC you encounter in BL1 & BL2 and is now a playable character in Borderlands the Pre-Sequel.

Borderlands the Pre-Sequel will launch later this year and become available for Xbox 360, Playstation 3 & Windows PC.