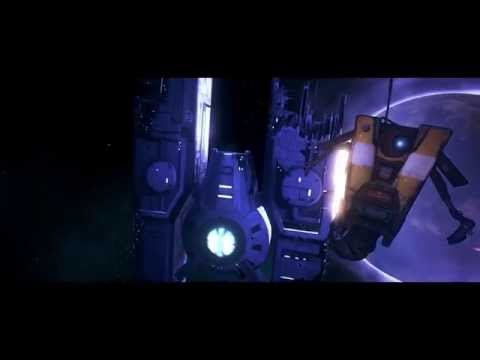 Get ready for the Moon Dance and some new details about the newest game in the borderlands franchise. As the introduction fades we get to see (Handsome) Jack’s new look, shockingly he has no mask.

Directly after that, we see the new Pre-Sequel Vault Hunters, Wilhelm the Enforcer, Nisha the Lawbringer, Athena the Gladiator, and Claptrap the Fragtrap in action.

After this, a short snippet shows off Moxxi with a more mechanic’s look, did she join the family business and start up her own catch á ride station on the moon? Also, a short glimpse is shown of Lilith in her Borderlands 2 look.

Then the trailer shows off some gameplay footage with the low gravity and the new weapon types.

Borderlands the Pre-Sequel will feature laser & cryo weapons and will make the gun arsenal even more bazilliondiestier.

The low gravity and the O2 kits will give the player the opportunity to hover or double jump in mid-air. Also, we see some new enemies on the battlefield, from moon rock kinda monsters to spacesuit bandits.