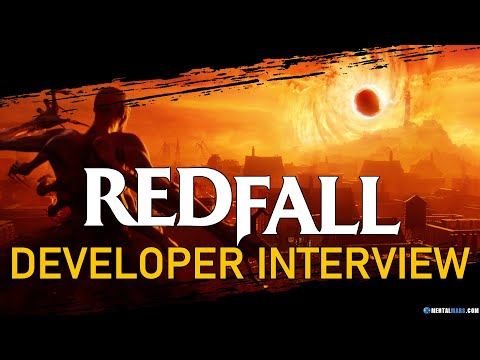 The developers from Arkane Austin sit down to talk about their upcoming title, Redfall. A story-driven open-world shooter that mixes in RPG elements. Choose from a roster of 4 heroes and claim back the town from vampires and cultists.

Arkane Studio does what it does best with Redfall, combining FPS with RPG but trying to raise the bar because this time they are creating an open-world environment that is playable both solo and co-op.

They want to create a believable world that you can temper with. While the A.I. does its thing, you can observe and assess the right course of action. The developers give you this toolset that you can use to influence the situation and approach scenarios differently as you make your way through the game.

While Arkane Studios is building its biggest game yet, they want to immerse you into a world that feels like a small local town.

With the day and night cycle, and the weather mechanic, you get different experiences. Because when it’s nighttime and the fog has set in, the random spawns keep you on your toes as you progress through the world.

Redfall is a spooky game, it isn’t a jumpscare simulator but the devs want you on the edge of your seat.

The Story of Redfall

The story starts with these entrepreneurs that set up shop on the island. As they were conducting research into life expansion, things didn’t go as planned and the researchers managed to turn themselves into vampires.

These predatory monsters slowly turned the once-peaceful town of Redfall into their own personal playground, as they blocked out the sun and pushed the water away from the island.

The vampires in Redfall aren’t your typical vampires. While they have fangs, drink blood, and hate sunlight. Their transformation isn’t like a virus that can be cured. The people that got turned were already a vampire within. They want to live forever at the cost of everyone else.

You also encounter cultists throughout the town of Redfall. They worship the vampires and want to become just like them. The vampires will transform some of them into vampires or other types of monsters.

Cultists can be turned into blood bags, monsters that produce an excess amount of blood for the vampires to feed on.

Vampires come in various types. You have your named enemies, and mini-bosses but then there are also Vampire Gods that act as big boss battles that break up the game in chapters. The Vampire Gods are the strongest type, they are the ones that trapped you on the island.

There are 4 playable characters in Redfall each with their own personality. Some come from the island others don’t so you have those different perspectives.

The characters don’t have fixed classes. It’s not like one character is the tank or healer.

Jacob can become invisible, has sniper perks, and has a raven that can scout for him.

Dev is kinda weird and has homemade gadgets at his disposal like javelins that shock nearby enemies, he can teleport around, and he has a blacklight that freezes enemies.

Remi has her stick bombs and Bribón – her companion robot – at her disposal.

You can play any character that you want in co-op, you aren’t forced to select different heroes. Even when you play the same character there is build diversity to create a different playstyle.

Each character has a Skill Tree and you can use Remnants to augment your character’s abilities.

When you level up a certain skill high enough, you can share that ability with your co-op buddies. For example, when Jacob maxes out his cloak ability, every member of the team can cloak.

Every skill is designed to work in solo but some have additional benefits when playing co-op.

Redfall isn’t your shooter where hordes of enemies constantly run at you. Enemies do their own thing as they aren’t aware of you.

You are the hunter instead of the hunted. However, when enemies are alerted by your presents, Vampires will hunt you down and soldiers will flank you.

Like any Arkane game, you can assess the situation and handle it accordingly. A solo player might wanna use more of a stealth approach while a team can have a party game-like experience.

There is a wide range of weapons in Redfall. There are high-end military weapons but also grandpa’s shotgun that he kitbashed together.

Then there are your anti-vampire weapons like stake launchers, flareguns, and UV beams.

Weapons can have blade attachments like broken mops, guitar handles, and garden gnomes.

There are weapon levels and different rarities.

Redfall is the biggest world that Arkane Studios has built to date. It’s designed to be traveled through by foot with a lot of environmental storytelling as you are able to enter buildings.

While the setting of a small town might look familiar at first sight, the vampires have put their mark on the world.

You will also discover areas that will twist reality as you know it.