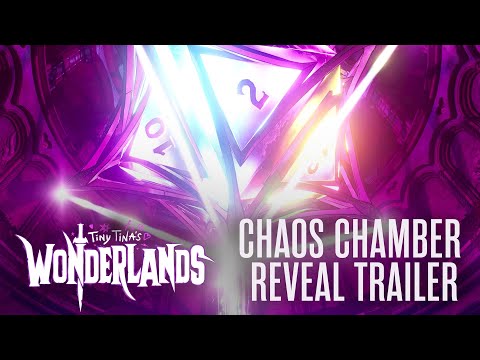 Gearbox Software and 2K Games announced the awesome end game mode, Chaos Chamber, for Tiny Tina’s Wonderlands. The mythical Chaos Chamber challenges you in your quest for loot as rooms, enemies, and objectives will change every time you enter this randomized dungeon.

Each time you clear a dungeon room you will have to make a choice between 2 portals unless the next room is a (mini) boss fight. Two portals will spawn after you clear a room. Now you determine what happens next as each portal augments the remaining Chaos Chamber run.

During your Chaos Chamber run, you will be presented with 4 different portal types to choose from. Each portal is represented by its own symbol and adds something to the next room in your challenge run. You are always given the choice between 2 random portals at the end of each room.

Rewards you with additional loot when you beat the next encounter.

Rewards you with more Crystals when you beat the next encounter.

The Queen herself will be waiting for you when you have beaten the next encounter. She will bless you by picking a random passive skill from your skill tree and increasing its power.

The Dragon Lord will await you when you have beaten the next encounter. He will give you a choice between 2 random curses. These curses will modify the difficulty and increase the crystal rewards.

You will be rewarded with a unique loot room at the end of your Chaos Chamber run. In this loot room, you will be able to spend the Rainbow Crystal you have collected throughout your run. There are multiple rabbit shines where you can offer your crystals to and each of these shines offers a particular loot type. So if you want to specialize in a melee weapons or need a new amulet you can feed the rabbit some crystals and it will barf out a rainbow filled with that particular loot type.

You can get more Rainbow Crystals by completing side objectives or smashing rainbow dice throughout your run.

Throughout your Chaos Chamber run, you can pick up curses or blessings which will make your run harder or easier depending on your choices.

Blessings can be found in small altars. They provide you with boosts to help you on your remaining run. These range from increased Max Health to increased Weapon Damage. Blessings do cost crystals.

Curses are designed to make your run more challenging but in return, you will get more loot during that run. Curses come in easy, medium, and hard modifiers. While the easy ones could still be beneficial the harder ones are designed to test your skills.

How to get Crystals

Follow this guide to maximize the amount of Chaos Chamber Crystals you get.

Wait there is More

Where is the chaos chambers located?

You can find the Chaos Chamber in Queen Butt Stallions Castle after you finished the main story campaign.

Yes, every Chaos Chamber run has randomly arranged dungeons including a random boss encounter at the end. Unless you are running the Featured Run as that one is fixed and will be altered on a weekly bases.

Does Chaos Chamber count as a dungeon?

Yes, each room in the Chaos Chamber counts as a dungeon. So you can enjoy that passive dungeon skill on your ring during the end game.

Can you save your chaos chamber crystals?

No, you need to spend your crystals on the barf bunnies in the loot room at the end of your Chaos Chamber run because they don’t carry over to your next run. So use it or lose it!

Chaos chamber is elite worth it?

The cost of making Chaos Chamber Rooms Elite can stack up on subsequential rooms. If you don’t add Chaos Curses to your run to increase the drop rates, the rewards won’t significantly justify the costs. Here is how you get the most crystals during your run.

The Gold portal will finish your Chaos Chamber Run and take you to the loot room. However, when you unlocked a hidden boss there will be a red portal waiting for you next to the Golden portal. Choose wisely because there is no turning back.

There is also a hidden Cult of the Dragon Lord Challenge in the Chaos Chamber.