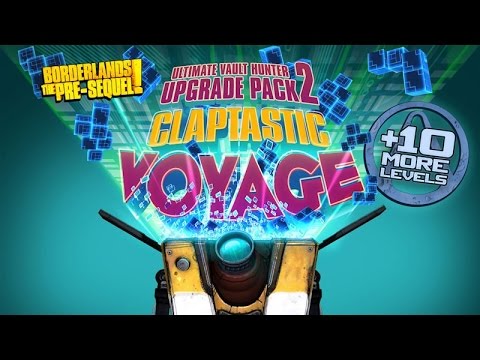 Handsome Jack discovered during the Claptastic Voyage campaign that Tassiter had a piece of powerful software. The only problem is that Tassiter has hidden it in a place where no one would think to look. This secret hiding location is located in Claptrap’s software.

Therefore, Jack calls upon his loyal Vault Hunters to digitize them and insert them into claptrap’s software. This means we will be going inside the mind of Claptrap in search of the mysterious “H-Source” code.

Along the ride, we will also discover claptrap’s hopes, dreams, fears, and stupidity. Make new friends and meet up with fan favorites like Tannis & Dr.Zed.

“Claptastic Voyage features a new customizable arena that lets you choose your own gravity settings, enemy difficulty, and more.”

This new loot is Glitched Gear it’s a new weapon rarity. These items stand out as they have a binary code on them. The red text on the gun card displays an error code that actually tells you what secret powers this weapon has.

For example, an SMG can glitch out and start shooting like a shotgun. There is an overload glitch that will cause your gun to shoot slowly and each shot will knock you back. However, each shot will become devastating. So basically what normally would be considered a bug in the game is now a feature.

Claptrap’s DLC will include an Ultimate Vault Hunters Upgrade Pack. The level cap will increase by another 10. Together with the first Ultimate Vault Hunter Pack, you can spec out your character to Level 70 !!!  Making it possible to obtain all three capstones in your vault hunter’s skill trees. (Respec costs are up by 400%)