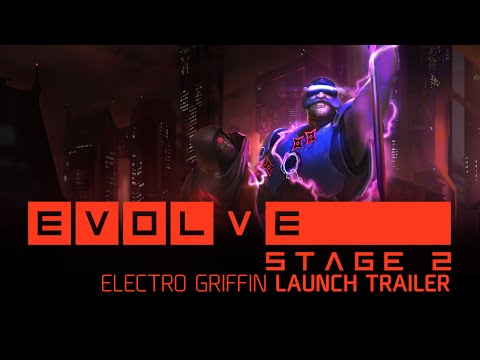 Evolve’s most rad Hunter, now available to unlock! Coming straight out of the latest box office flop “Electro Griffin and the Ninjas of Neo-Tokyo”, Roger Brown

Electro Griffin knows taking on Monsters will be no easy task, so bringing along the latest and greatest in Ninja fighting technology with The Laser Storm and The Final Lockdown…The Monsters of Shear are sure in for a shock when Electro Griffin first lands into the Hunt!

Designed to take a new twist on Griffin Halsey’s infamous Gauss SMG that was used to take down the Orion Tarrasaur. The Laser Storm is Electro Griffin’s primary weapon when it comes to taking on the dangers he’ll face on Planet Shear. Infused with electro neuron dampening plasma that will slow the movement of anything it touches, this weapon will dish out damage and keep the pressure on the Monsters. Utilizing the Electro Suit, the user will also be able to move at full speed while firing to help keep that hot plasma on any hostile target.

Bringing another twist on the original Griffin Halsey kit, the harpoon gun for Electro Griffin has had a shocking redesign to take on Ninjas and Monsters alike. Since Electro finds himself in many close calls, the repurposed harpoon gun dubbed “The Final Lockdown” is the right tool for the job. Infused with face melting, chord ripping, shredding sonic disrupter energy. The Final Lockdown when held on a target will damage and lockdown any movement the Monsters had planned on making. Be on the lookout for the personally altered acoustics that Electro Griffin has requested. These alterations were necessary to melt the faces of anyone who stood in his way.