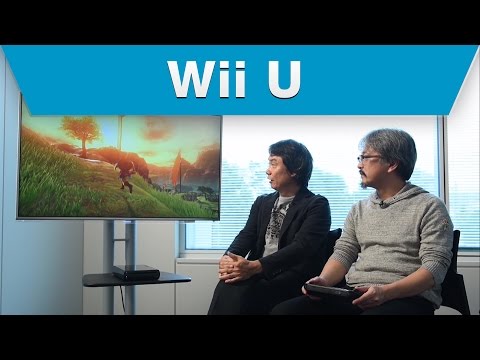 Earlier this year at at E3 2014 Nintendo showed the first trailer of The Legend of Zelda. A new game in the Zelda franchise with a new look. It’s a combination of the cell shaded style of the ‘wind waker’ and the paintbrush style of ‘skyward sword’. Last week at the Game Award 2014 hosted by Spike TV, Nintendo showed up with the first gameplay footage of the new Legend of Zelda for Wii U. Franchise Director, Eiji Aonuma and Nintendo legend Shigeru Miyamoto walk you through the Legend of Zelda Gameplay demo.

To bad we don’t get to see the gameplay footage directly, however the Legend of Zelda 2015 looks colorful and larger than ever before. As details are a bit low with this off screen content we can get a good impression of the game. If you want to have a better look at the games graphical style, check the trailer i mentioned above. The Legend of Zelda Wii U looks like it’s the enormous world that they set out to create, placing those beacons can get real handy. Eiji Aonuma wanted to get back to the old skool exploring from the first Zelda game.

The Wii U Gamepad can be used as a mini map that you can interact with. Zooming in and out, but if you look at the other buttons it seems like you can access another menu. Will this other menu be the one where you can set your items, gear or weapon ? So we can switch on the fly in real time ?

The trees look like they have been placed apart so Epona, the horse, can easily navigate through them. Miyamoto hinted at the trees that they have the ability to grow fruit/apples. Eiji Aonuma comments that you can pick and eat them. In previous Zelda games apples have been able to restore Link’s health gauge. BTW. I hope Link doesn’t have to cut all that grass though 😉  Jumping of the horse will trigger a slow motion, giving like Bullet-Time or should i say Arrow-Time (Max Payne eat your heart out). This feature as actually teased in the first trailer, but back then it just looked cinematically good.

Tags: The Legend of Zelda

The Legend of Zelda: Breath of the Wild Expansion Pass
January 14, 2017

The Legend of Zelda: Breath of the Wild – Nintendo Switch Presentation 2017 Trailer
January 12, 2017

The Legend of Zelda Wii U Overworld Update
December 22, 2014