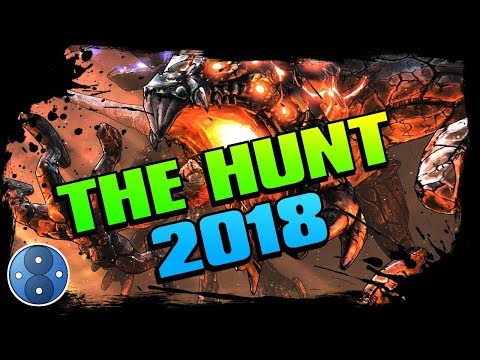 A new edition of the Borderlands community event, The Hunt, has officially been announced. #TheHunt2018 will start on February 19th, 2018, and will go until February 25, 2018.

If you want to participate the sign-up is officially open. Make sure you are familiar with the rule set. This competition is for vanilla Borderlands 2. The usage of the Unofficial Community Patch or any mods that change the vanilla drop rates is NOT allowed. Also, no Golden Key items are allowed. For the full list of rules and regulations check out the resources below. Hopefully, Gearbox will support these types of events in the next Borderlands game.

If you don’t know what The Hunt event is then let me fill you in. The Hunt is a community event where the participants play Borderlands (2) and go and obtain a specific set of gear. The list contains unique gear as these have a specific drop location but not a guaranteed drop chance.

This forces players to grind specific bosses or areas in order to obtain the specific weapons. While a drop might be random and some players are luckier than others, there is a level of skill involved to be efficient. The whole run must be streamed online to check if the player actually played fair.

We are now over 100k raised for @StJude with #TheHunt2018 the @GuardianCon community is unstoppable!

Highlights of The Hunt 2018