More Info
Home » News » Interview on what is Battleborn ? 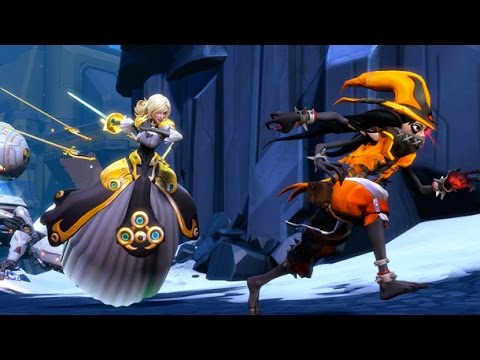 Interview with John Mulkey (Design Director) & Randy Varnell (Creative Director) on Battleborn. The lovely people at game informer got to play Battleborn and featured the game for a month. During their hands-on experience they liked the game and tried to identify & define what kind of game Battleborn is.

Is Battleborn a MOBA?

The main question in this video is if Battleborn Gearbox’s MOBA? And the short answer to that is No, Battleborn is not a MOBA. Game informer got to play one of the multiplayer modes of the game. Battleborn does takes certain elements from the MOBA genre and the multiplayer mode that they got to play is heavily inspired by that. But Battleborn  does draw from other games as well.  The character roster is so diverse that the character select screen is inspired by fighting games.  But Battleborn also features some extensive RPG elements. Battleborn is a blend of genres, it’s not simple game#1 + game#2 = Battleborn.

At the core Battleborn is a FPS (First Person Shooter), but there are melee character. So you can’t really  stamp the term FPS on it. Just like some aspects are sci-fi while others are that of a fantasy setting. Just like the heroes in the game that come from all over the place, Battleborn also incorporate this with it’s gameplay elements. Fine picking all the best ideas from all over the place and fine tuning them together. Before Borderlands no one knew what a loot ‘m shooter was, with Battleborn Gearbox wants to create a whole new type of game.

Tuning the MOBA aspects of the game resulted in several chances to the gameplay. Using static towers was dull and didn’t fit into the FPS genre, so they got changed for spiderbots that can move around. You are not playing on a flat surface the minion behaviour had to be adapted to work in these environments. The multiplayer maps aren’t your 3 lane gate ways.

Towards the end of this video Randy & John talk about the campaign mode. How this is structured and the  different gameplay and character.