With the new Story Operations Gearbox Software have introduced some new legendary gear to the game. A little while ago I was able to acquire the legendary drop from the final boss in the Story Operation; Toby’s Friendship Raid. It’s called the “Arcship Raider’s Wrench” and this legendary is a unique one because it has some interesting stats. It decreases your buildable cost and it increases your movement speed. The unique legendary boost is that all your buildables will get increased attack damage and damage reduction based on your current Ops Points. 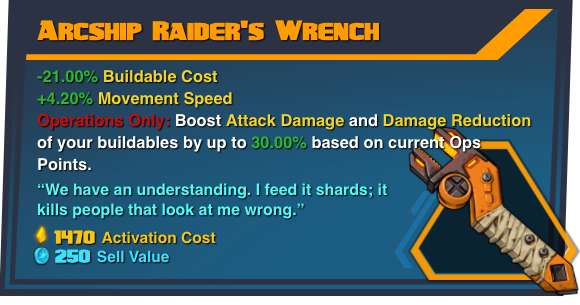 This legendary gear item can potentially be a good one to have if you are into building stuff like turrets. But that is exactly what the current story operations are kinda lacking in my opinion. There aren’t a sufficiënt amount of buildables throughout the current story operations to justify the investment in this piece of gear. This is because there aren’t a lot of defense sections in these missions that cater to that. If we look at some of the main story missions that are part of the base game there are more turrets that you can build there and are more meaningful to build. Especially during those defense missions like the Archive. This is really a good mission for this legendary piece of gear as you are able to build turrets throughout the mission. These assist you in the fight against hordes of enemies that coming at you from all directions. And they are more meaningful to invest in as halfway through the mission you have to backtrack and are able to benefit from your buildables as you make your way to the next location. There are even buildables that let you access small areas that you normally wouldn’t be able to get to if you didn’t spend shards on those turrets. While the mission rewards you with a big shard cluster it is nice to get a better profit deal out of these secondary objectives. But the mission doesn’t stop there with utilizing turrets as part of the game mechanic, because the final boss also requires you to build turrets in order to take out his shield before you can take him down. This mission is a showcase of good usage of the turrets and if something like this was the case in a story operation I would have found this legendary a lot more useful. I could add some nuance here because drones are also buildables that aid you in your quest. However, I do find the attack drone a bit lacking in firepower compared to the turrets.

Meanwhile, with the winter update live stream the Creative Director, Randy Varnell, did mention a little something-something about the upcoming dlc. He spoke a little about the next 3 Story Operations and one thing stood out for me. Randy said that the Oscar Mike versus The Battleschool Story Operation will be a bit tailored towards the community that is asking for a horde mode experience. With a hint like this, I would expect a mission with a bigger emphasis on buildables and defense areas. And if that is the case for this upcoming story operation, the Arcship Raider’s Wrench would become more useful. I think it would have been nice to get this legendary item in that story operation instead of in Toby’s Friendship Raid. Because I think its good game-design that the legendary item that is able to help you complete the mission also drops in the mission you are trying to complete over and over again. Especially when these Story Operations can be purchased individually. It shouldn’t be that you need item x from the other mission in order to complete this one. Because this allows you to make the increasing difficulty on these story operations a bit harder, but on the other side you also provide a way to help the player to achieve that goal of completing the mission on the highest difficulty. But that could just be me, in any case, what do you guys think of this legendary? I think it would also have been a great piece of gear to have in PvP if the legendary boost wasn’t tied to your ops points. Maybe it could scale with your helix level throughout the match. Or do you guys think this legendary item is an omen towards an upcoming story operation that requires you to build more turrets?