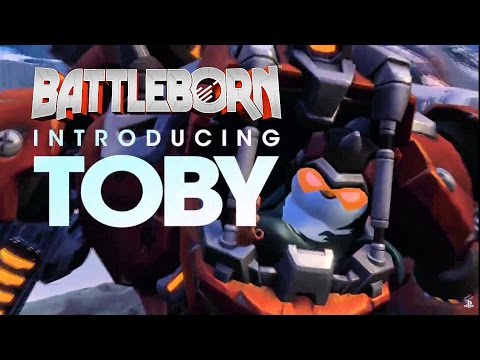 During the Playstation Experience in San Francisco, Gearbox Software CEO, Randy Pitchford gives a small presentation  on  their upcoming game; Battleborn. Here he clarifies that Battleborn will a Story campaign that you can play solo or with friends and that they even support couch co-op. Battleborn also has a multiplayer component where you can battle with and against your friends online.Randy also talks about an upcoming Beta for Battleborn. There is no fixed date at this point but the beta will launch first on Playstation 4. Another exclusive thing that  PS4 gamers will get access to an 16th character.  As officially there are  only 15 characters announced Randy reveals a new hero Toby the Destroyer (Nr. 16 of the 25). He is a ‘cute’ killer penguin in a mech suit, learn more about him on Toby’ Profile page. Battleborn will launch with 25 playable characters but all Playstation 4 Beta participants  will get a free 26th hero.  This is an exclusive deal with Sony, this 26th hero will come as available as dlc character on all platforms but will be given as an reward for everyone who helps out during the PS4 beta.

@DuvalMagic Sony decided they wanted to have something special for their gamers, so they made it possible for is to give it for free.